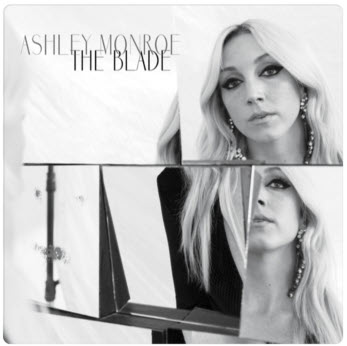 Ashley Monroe may well be the current Queen of Country Music, both for her astonishing solo smash from 2013, Like A Rose, and for her subsequent work with the likes of Blake Shelton as well as the female country supergroup Pistol Annies ( Ashley teams up with Angeleena Presley and Miranda Lambert). With her new album The Blade, she knocks it right out of the park with an album as satisfying as anything that Dolly Parton or Emmylou Harris has ever released. Notice we failed to mention, even in passing, the multi-platinum selling Taylor Swift, who has proven a musical mystery around the Vivascene writers’ table. We’ve concluded that Swift is somewhat good and somewhat original, but what is good about her isn’t original, and what’s original about her isn’t good. Monroe, on the other hand, is the real deal, and a welcome one at that. With The Blade, you’re about to hear an album you’re going to treasure for years to come.

The material is classic country fare – romance, heartbreak and desire. The arrangements are traditional, so much so that this album could well have been made thirty years ago. Don’t let that dissuade you. Monroe’s delivery and performance of these tunes is strong, memorable and compelling both in its understated authenticity and its lyrical beauty.

Key tracks: the major key opener “On To Something Good”, and the heartfelt broke-down “I Buried Your Love Alive”. The standout, though, is the title track “The Blade” – as well-written a country lovelorn stab to the heart as ever as been sung. On the whole, there’s not a weak number on the album, which makes it a contender for Best of 2015 as we slide into the latter part of the year. So far The Blade has our vote as the top country album issued this year.

Make no mistake: Ashley Monroe belongs in your record library. Start with The Blade, and you’ll soon be pursuing her earlier work, Like A Rose, as well as everything else she’s done, particularly with Pistol Annies (see the scorcher “Hell on Heels” on YouTube.)