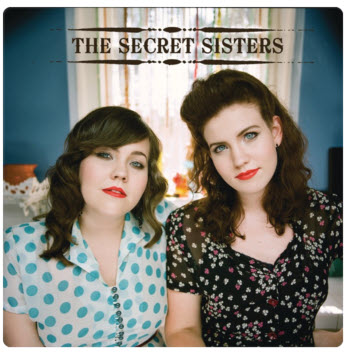 From the musical hamlet of Muscle Shoals, Alabama came the wonderful voices of Laura and Lydia Rogers, aka The Secret Sisters with their self-titled debut album, produced by none other than T Bone Burnett, who is known for impeccable taste and first-class studio work. The album came out back in 2011, and its appeal remains strong (though their career never quite achieved the heights they deserve).

The Secret Sisters can sing with the talent that only The Everly Brothers have ever had: close harmonies that make any music fan want to holler for joy and cry with gratitude. Maybe it’s genetic, maybe it’s simply knowing the other so well that communication is accomplished through the heart, but the way these two sisters sing together cries out for them to record anything they care to, for the rest of their natural lives. Imagine, if you will, that Emmylou Harris or Alison Kraus had a singing sister and you will have some idea of what The Secret Sisters could mean to American music. If, that is, minor talents such Taylor Swift hadn’t received overblown attention. Listen to their take on the Bill Monroe classic The One I Love Is Gone and see if you don’t agree with what T Bone Burnett says about them:

“I have been making music for over forty years and The Secret Sisters album is as close to pure as it gets.”

“Listening to the Secret Sisters sing, you hear in their voices a sound that is timeless and of the moment. You hear the history of rural American music from the 1920s and a reverence for every musical genre this country has produced. Popular music requires the absolute honesty of the Secret Sisters, and I’m thrilled to be involved in presenting them to the world.”

The Secret Sisters were nominated for an Americana Award for this album. Recorded in Nashville’s legendary Blackbird studio over the course of a brief two weeks, this record manages to make country music sound real again. Standout tracks include Tennessee Me, Why Baby Why (a George Jones classic and his first hit that dates back to 1955), as well as the indescribably beautiful The One I Love Is Gone. And they turn the Nancy and Frank Sinatra minor pop hit Something Stupid into something heart-stopping.

“In so many ways we are still the same kids who would perform songs in our parents’ room, when we sang about silver threads and golden needles and cold-hearted snakes, and all that. Even with everything that’s happened – getting that dream chance to make our own album, I really believe we’ve just found where we’re supposed to be.”

“We didn’t use any auto-tuning. The two of us sang into one microphone into analog equipment.”

This is one of those records, straight-forward, unadorned and stunning, that deserves a re-appreciation of its considerable merits.