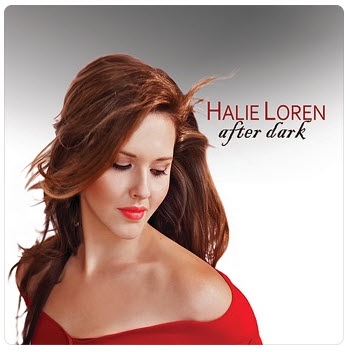 Halie Loren was the winner of the Pacific Songwriter Festival in 2005 and has gone on to become one of the finest young jazz singers of her generation. She has both an exquisite musical sense and the talent for phrasing that makes a song come alive. Her new album After Dark (her fifth) was released late in 2010 and reveals a major star in the wings, soon to take centre stage.

Growing up in Southeast Alaska , much of Halie’s diverse music exposure came early-on from listening to everything public radio had to offer and her parent’s eclectic music selections. From her first on-stage jazz performance at the Sitka Fine Arts Camp at age 10, Halie knew music was to play a big role in her life. She later moved to Eugene, Oregon and has been a singer-songwriter since the age of 14 and a full-time musician since winning the Pacific award. She’s in her mid-twenties now and is perhaps more widely known in Japan than she is in North America, a circumstance no doubt arising from the Japanese fondness for jazz American style.

Her voice has been compared (deservedly) to greats like Tori Amos, Sarah McLachlan and Joni Mitchell (whom Halie has covered on more than one occasion, in the past with “River” and currently with “Carey“.).

On her website Halie lists influences as diverse as Bjork, Etta James and Nine Inch Nails.

She has gone from winning the Just Plain Folks Award for Best Jazz Vocal album to becoming a major label artist in Japan (her album They Oughta Write A Song went to #1 on the Amazon Japan charts and stayed in the top-10 for several days). The crowds in Japan have been growing, and would seem to portend the success that in our view is inevitable back home in the States. Loren also released a successful live album, Stages, showing off the line energy that makes her an in-demand performer.

After Dark mixes original and cover tunes and shows a somewhat lighter side of Loren, who is again joined by the capable skills of pianist Matt Treder, bassist Mark Schneider, Chris Ward on guitar and Brian West (percussion), with guest appearances by guitarist Jack Jezzro. Here is the track listing:

She has also tackled the pop music book and done so more successfully than any jazz singer in ages. Her take on “Ode To Billie Joe” is sensual and mysterious, and her live versions of Procul Harum’s ‘Whiter Shade of Pale’ and U2’s “I Still Haven’t Found What I’m Looking For” are nothing short of a revelation.

After Dark includes covers of Joni and Tracy Chapman, a duet in “Beyond The Sea” and several originals. Halie’s influences and songbook are diverse and imaginative; she simply can’t be confined to one genre or one time period of music and that is something to be applauded these days.

Too often we’ve witnessed ‘serious’ singers tackle rock-oriented material and come away bewildered, but Halie brings a deeply-felt interpretative ability to to these songs that brings the audience a fresh and memorable perspective. Simply put, more please.

That said, she is a wonderful singer of standard jazz material and her version of the Edith Piaf standard “La Vie En Rose” is very moving, almost enough to make one forget the original. She sings with a sense of joy and discovery that has been missing from the music scene for some time. If this is your introduction to jazz, there can be no better.