Essentials: Nina Simone “I Put A Spell On You” Review 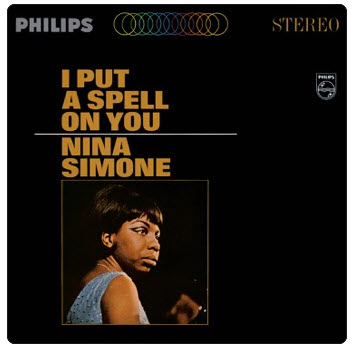 As they say in baseball, here’s the windup: “I Put A Spell On You” is one of the great songs of any era. It was composed and first recorded by Jalacy Hawkins, who was better known as “Screaming Jay”. The song dates back to 1956, when Hawkins and his band turned what was to have been a ballad into a drunken party of a record that is mesmerizing in its intensity.

Apparently Jay passed out that night and had to relearn his performance from the recorded capture of his sexual growling and the jealous hysterical approach he had brought to the song. When noted deejay Alan Freed put up $300 for Hawkins to emerge from a coffin onto the stage to enhance the voodoo air exuded by the song’s title, Hawkins succumbed to the offer and created a persona that destroyed his operatic ambitions.

Hawkins had dreamed of becoming the successor to his hero, Paul Robeson. Instead he became the predecessor to Bobby Boris Pickett (Monster Mash), the Kingsmen (Louie, Louie), the Trashmen (Surfin’ Bird) and Alice Cooper (School’s Out), as well as every other shock rocker who has donned a wild costume and screamed his warlock lungs out while exhibiting his vampiric practices ( in some cases real, as in Ozzy Ozbourne chewing the heads off live birds) on stage. You get the picture.

And now the pitch: it’s straight down the line, it’s a slider, no, it’s a slow curve, it is a thing of beauty of folks, it is an impossible dream of a pitch. Ladies and gentlemen, Nina Simone has earned the World Series of Singing for what will surely not be the last time. The crowd is on its feet, but Nina is urging them to calm down; she won’t allow her concentration to be disturbed by an unreasonable demonstration of applause.

Nina can make you forget that anyone else has ever recorded anything she sang, and she is the only artist I can say with confidence who is capable of that prodigious feat. A few examples:

“Don’t Let Me Be Misunderstood” – her take on the song reduces Eric Burdon to being an overwrought blues shouter with a very limited range of voice and expression. Listen to Nina’s recording of this song and I guarantee you will think of the people in your life you have misunderstood and need to forgive.

“Pirate Jenny” – recorded two or three years earlier than Judy Collins’ 1965 version on her acclaimed album In My Life. Nina’s version destroys Judy’s. I guarantee you that if you are at all sympathetic to songs of the theatre, you will seek out Nina Simone’s version and play it once a week for the rest of your life.

“Since I Fell For You” – first recorded in 1945 and covered dozens of times since, notably by Lenny Welch who had a big hit with it in 1963. Nina delivered the definitive version in 1967.

“I Put A Spell on You” – she sings the song Jalacy Hopkins wrote, not the one that Screaming Jay murdered. And don’t get me wrong. Hawkins’s version is one of the most memorable of all recordings. Nina restores something to the song that reminds the listener of why it was written: it is a ballad of overwhelming sexual jealousy (Jalacy?) and of a wronged lover’s determination to keep her man. The song became as strongly associated with Nina as it was with Screaming Jay; in fact her 1991 autobiography was entitled I Put A Spell On You.

So what is it about Nina Simone that has captured the interest of such a diverse audience over the past forty years? For one thing, she was classically trained, but had the musical sense to know a great song when she encountered one, regardless of its source, be it soul, jazz, pop standards, country, blues, folk, etc. She recorded tunes by the Beatles, by Dylan, by Randy Newman, by David/Bacharach and a countless host of others.

She was a first rate pianist who has initially set her sights on being a classical concert performer, but found that in the early sixties all doors were closed to a black woman with such ambitions. She turned to singing in supper clubs for a living but never forgot the injustice of American racism. She became politically active and remained so all of her life, even going so far as to leave America for Africa and later, Europe.

Here’s the main thing: her classical training didn’t stick her in straight-jacket of formalism. Listen to a few contemporary opera stars who try to sing some pop stuff, or to a few jazzters who try to play Hendrix. With Nina, she was authentic regardless of the genre or the style of the material. Not to mention she was one hell of a writer and composer of blues, soul, and jazz herself.

She was called the High Priestess of Soul, a term she came to despise. She preferred to say that she played black classical music. She was called temperamental for her infamous decisions to stop playing if her audience wasn’t attentive enough; if only all artists were so temperamental! People also compared her to Billie Holiday for the soulful quality of her singing, but Nina was not a fan of Billie’s. She thought Billie to be a lower form of life, a drug addict who could barely sing and who howled like a cat.

Nina was inspired by early love for Johann Sebastian Bach, by Marian Anderson, the first black opera star, and by Maria Callas, whose music and emotional commitment to her material Nina deeply admired.

The difference between Maria and Nina is instructive; though they both suffered great personal unhappiness through their relationships with men, Nina was by far the more resilient. She turned her suffering into artistic triumph, time after time. Listen to her sing the Beatles’ “Here Comes The Sun” and you will, I think, agree with me that their contribution was as songwriters, not as performers. And yes, I’m aware that George Harrison, and not Lennon-McCartney, penned the tune.

Nina brought both despair and joy to her interpretation of the song, reminding us that artists are artists precisely they feel and reveal things more deeply than others and are able to transform their turmoil and their tribulations into tangible (and often intangible) experiences that refresh and restore us.

I saw Nina Simone perform in the early Eighties, a time when she seldom came to North America. I’ve been a fan ever since. She had an uncanny sense of building a song and building a concert that would render an audience delirious with satisfaction. A voice like hers could save marriages; it could remind any man or woman, no matter how hard-hearted, of where they came from and where they’re going. She is Bach, Anderson, Callas, and Robeson all rolled into one, with a mixture of Aretha Franklin and Billie Holiday thrown in for soulful good measure.