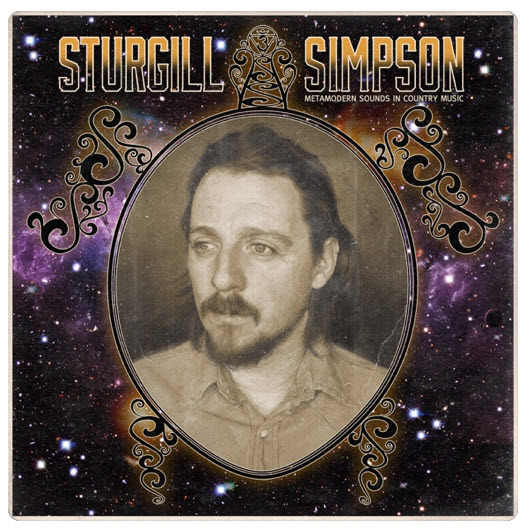 Sturgill Simpson‘s 2014 release is a strong candidate for Country Album of the Decade.

The opening notes of the leadoff track of the Sturgill Simpson’s Metamodern Sounds in Country Music quickly reveal his influences. Until, that is, his powerful backing band kicks in with psychedelia. He’s a throwback to the days of Waylon Jennings and Kris Kristofferson: his deeply masculine world-weary voice drawls contemplatively over what seems to be a traditional country background. So begins “Turtles All The Way Down”, sounding for all the world as though Waylon himself had returned from the dead.

If you’re half a fan of Waylon and Kris, you’re going to hail Sturgill Simpson as the best thing to happen to country music in a long time. If you’re a devotee of new country, on the other hand, you might not have the stomach for what Simpson offers up: it’s a stronger drink than most. As for us, we like our whiskey straight up, no mixer, so this new record, for us, is a strong candidate for record of the decade. It’s an ass-kicker and a mind-bender all at the same time.

A Kentucky native who moved out west and formed the outlaw roots band Sunday Valley about 15 years ago, Simpson scored big in 2013 with his debut solo album High Top Mountain. He caused a stir with that record, but Metamodern Sounds catapulted him even higher.

For one thing, he’s got a voice without compare. Other than to Waylon that is, who for our money was one of the finest country singers of all time. Sturgill also can write up a storm. And his band – well, he has assembled perhaps the finest country band to come together in years, delivering psychedelic guitar that reinvents that Bakersfield stuff. Then there’s that rock-hard drumming that opposes yet complements acoustic guitar. It’s not a formula – Simpson writes variety into his melodies and his arrangements.

As for the title of this record, well, it’s a somewhat unsubtle reference to the groundbreaking Ray Charles classic from 1962 that billed itself as Modern Sounds in Country and Western Music. That was an unusual record by a jazz artist who went country and who single-handedly brought an uptown audience to appreciate the depth and emotional sincerity in what had come to be regarded by sophisticates as hillbilly tunes. So for Sturgis to name his album “Metamodern Sounds” is ambitious. What’s he after? Well, for the past decade or two country music has embraced the likes of Blank Blake Shelton and Tiresome Taylor Swift. In our view, no one’s made a decent country album in years, let alone a great one. Metamodern is more than great; it’s a wakeup call to all of those country phonies to quit the business altogether and make room for authenticity, reality and true passion.

Key tracks on Metamodern include the terrific opener, as well as the rousing “Long White Line” and the emotional weeper “The Promise”. If the latter doesn’t bring a tear to your eye for its emotional ferocity, well, you might want to visit the doctor and inquire about your heartless condition. As for that metamodern feeling, the track “It Ain’t All Flowers” sums it up perfectly, with a going-to-hell approach to lyric, vocal and out-there guitar solo. Country music never felt so damned powerful as this track.