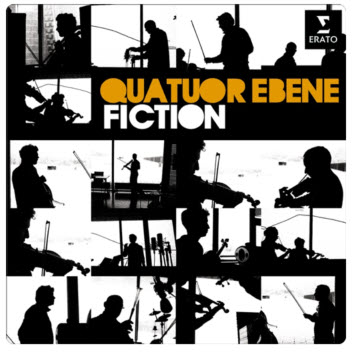 There’s a brilliant answer to the old question: can classical players swing, rock and let loose? The Ebene Quartet proves decisively that they can and in their 2011 album Fiction they created an irresistibly seductive listening experience with an adventurous mix of jazz, pop and film music. From interpretations of The Beatles ‘Come Together’ to Bruce Springsteen’s ‘Streets of Philadelphia’ and to the less obvious but very satisfying foray into the music of jazz legend Wayne Shorter (“Footprints” is the tune here) these young masters of string music demonstrate conclusively that the jazz they play in their spare time is top drawer.

Their motivation: the experience of “a pseudo-reality of a string quartet that plays and improvises in order to regain the freedom that all classical musicians had in the past.” This is one glorious record and it deserves a wide audience. Rock fans can gain a new perspective on the music they love; devotees of ambient music can rediscover the pleasures of melody, and classical listeners can rejoice in the knowledge that their music has a future as exciting as any musical form.

The scorching and emotional music that came out of Le Quintette du Hot Club de France decades ago featured Django Reinhardt and Stephane Grapelli; they brought something new and vital to music, and The Ebene Quartet is working on achieving something very similar, but rather than bringing gypsy to jazz, they are bringing the intimacy of a string quartet flavored with swinging precision and inventive sonics. Half the tracks on the album feature the great drumming of Richard Hery. Several vocalists make appearances as well, among them the jazz singer Stacy Kent, Spanish pop singer Luz Casal and opera star Natalie Dessay, as well as film icon Fanny Ardant.

The members of The Ebene Quartet are four astonishingly young Frenchmen: violinists Pierre Colombet and Gabriel le Magadure, cellist Raphael Merlin and violist Mathieu Herzog some years ago released a record of serious quartets which won Gramophone’s Album of the year. They were described at the time by that illustrious magazine as ‘giving the impression of having been born into this music, breathing its rarefied air and yet making each work a unique, compelling listening experience.” And they’ve done that again with Fiction. They explain their credo as follows:

“As an ensemble we try to be as broad in our repertoire choices as possible. Genres like pop and jazz are often overlooked by the classical world because classical music is so intelligent, but when other musical genres are played really well they can also reveal treasures. This is why it is important for us to play jazz and other styles of music for a classical audience – because it introduces them to something new; and equally jazz and pop audiences can discover that classical instruments are capable of different sounds. Our jazz-playing also helps to inform our classical performance. It enables us to look at the score from a different perspective and to see classical music as a kind of improvisation. We like to be as free as possible in our performance and for every concert to be slightly different.”

From the swirling torchery of the opening track Misirlou the quartet takes command of all attention with its highly emotional playing. One listen to their haunting version of Calling You from the movie Bagdad Cafe and the listener is transported to an incendiary and unforgettable love affair. The quartet brings something genuinely new to this recording: the feeling of inconsolable memory and loss is palpable. What follows is a recording of incomparable beauty: their version of Corcovado, which is as elegant and satisfying as that of Jackie and Roy, the jazz duo who recorded the definitive version of this song on their Verve album Lovesick many decades ago. The song has been covered innumerable times, and most often badly but because it is such a beautiful composition singers of all stripes have taken on this song and gotten away with desecration. Stacey Kent’s precise diction combined with her cool emotion is backed by an expansive and inventive interpretation by the quartet and her delivery of this number is an artistic triumph.

The music of The Ebene Quartet contains strains and sounds from multiple genres; yes, there is classical and gypsy and jazz and also (unacknowledged and to these ears unmistakable) the revolutionary rhythms of the Argentinian master Astor Piazzolla. But there’s also youthful exuberance and a sense of great joy in every one of these pieces and some blistering solos that sound well, distinctly non-classical.