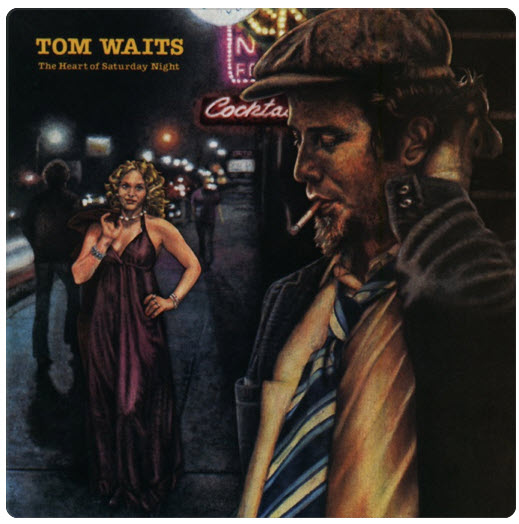 The album that made a thousand piano players wish they could sing like Tom Waits, and made a thousand singers wish they could play piano like Tom Waits, is still available on vinyl. If you have a turntable, The Heart of Saturday Night is a record to buy. If you don’t own one of those sweet-sounding belt-driven Regas or Clearaudio Concepts, then this is the record to start your LP collection while you save up for the equipment. It’s that good.

The record dates back to the early 1970s when so many groups like The Eagles were learning to play country music, and so many rockers were on the verge of wearing tightly-flared pants and looking for bass players who could play a whole lotta notes real fast. In other words music was in the doldrums and everybody was trying to reinvent themselves. The only authentic white guys around were people like Randy Newman, whose lyrics were so sharp you could cut yourself deep while listening to his 12 Songs or Sail Away during a quiet evening at home. Billy Joel was playing in bars for quarters and writing trashy songs which even he didn’t believe in. Bruce Springsteen was still a kid in New Jersey, fighting with his old man, listening to Roy Orbison, Dion, and Gary U.S. Bonds, looking for an attitude and wondering if he would ever get rich enough to drive an Oldsmobile in any direction out of town. There wasn’t a girl group to be seen. Bonnie Raitt toiled in obscurity and made a couple of terrific blues records that didn’t sell. FM radio jockeys were stoned every night and had lost sight of their souls. Great music was in short supply.

Out of this malaise came Tom Waits. He’d made a pretty good debut record called Closing Time  which had caused a bit of noise. The second time out though, he truly hit his stride. The Heart of Saturday Night is considerably rougher, yet is the closest Tom ever came to traditional song structure. The title song has been covered many times, and for good reason, but hearing the original never grows old.

The album cover was based on Frank Sinatra’s In The Wee Small Hours, which showed a broken-hearted Sinatra moodily standing on a street corner, looking as though he’d just lost the most beautiful woman in the world. This album remains a classic on which Sinatra’s singing is as close to perfection as the human voice has ever come in expressing the inexpressible.

Tom Waits took that perfection and improved upon it by standing the concept on its head. Waits is on the cover of his album, neon buzzing on the street-corner alright, and within view is the woman of his short-term dreams, the woman who’s going to get from Tom just as good as she gives to him. He’s no good, and he knows it. She knows it too but that’s not going to stop them from downing a few cocktails, getting it on, and seeing what happens next. The cover sets us up for the story inside, and Waits delivers on all counts. His gravelly voice, his lived-in look, his search for paradise in honky-tonks and bars: all of it has been heard and seen a thousand times, but what makes it different is his grasp of the details and the poetry behind it all.

Waits has said recently he doesn’t go much for poetry, but don’t believe it for a minute. He is one of America’s greatest songwriters and you don’t write great songs without knowing a thing or two about language, imagery, and the poetic process. Listen to ‘Diamonds On My Windshield’ for a powerful demonstration of what one man, one bass guitar, and some brilliant wordsmithing can do. This is brilliant stuff. And then there’s this:

“Barreling down the boulevard
Looking for the heart of Saturday night”

“If I exorcised my devils, I’m afraid my angels would leave too.”

The musical crew on this record is a small one, for the concept and execution is an intimate and jazzy drunk-on-the-moon affair. Here are the principals:

The sound quality is exceptional, having been administered by Wally Heider Recorders. Standout tracks are the title song, the afore-mentioned “Diamonds”, “Please Call Me, Baby” and “Shiver Me Timbers”, but the entire album is so well paced, so well-performed, and so memorable that to single out tracks seems a wasteful exercise. This album is a treasure, and is the foundation for the considerable reputation Tom Waits enjoys to this day. It’s his most romantic work, so if you are acquainted only with his later very far out experiments, you may find this work a surprise.