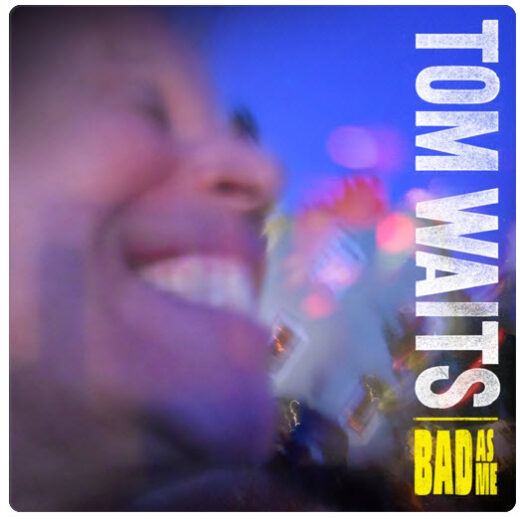 Tom Waits has released a stupefyingly great record in Bad As Me, proving once and for all that Tom, we hardly knew ye. We thought you’d got entirely lost in your own hipster gravel-voiced paradise, but actually you’ve been drawing us in one album at a time, until the only alternative presently left to us is to leave off all comparisons.

Not that anyone stands a chance in hell of approaching your stature as one of America’s most important songwriters; we were going to stipulate “of the 20th century”, but with this new release we’ve dropped that qualifier. What you’ve got to say and how you’re saying it is so damned intriguing we’re sitting here thinking just how cool you are. You’re one badass musicmaker, maybe the only true original still walking around, with your sources and your influences buttoned up tight while you stay real loose.

Here’s what his record company ANTI-Records had to say in a recent press release:

“This is Tom Waits’ first studio album of all new music in seven years. This pivotal work refines the music that has come before and signals a new direction. Waits, in possibly the finest voice of his career, worked with a veteran team of gifted musicians and longtime co-writer/producer Kathleen Brennan.”

Guest musicians on the record include David Hidalgo, Charlie Musselwhite, Keith Richards, Marc Ribot, Flea and a host of others. All the songs were co-written by Waits and his wife Kathleen Brennan, with the two of them also serving as producers..

The album opens with a hard rocking tune called “Chicago” that features a fierce vocal from Tom and some stellar guitar playing as well as a terrific fading harmonica (Charlie Musselwhite) that left us clamoring for more.

The real stunner, though, is the title track “Bad As Me” which starts out strong and gets stronger with this spoken interjection: “No good, you say? Well, that’s good enough for me.” The song is sleazy, dirty, lowdown, somewhat scary and intoxicating enough to make you reach for the nearest injection of alcohol and accompanying semi-clad waitress. In other words, this is a great piece of work from the man who brought you “Bad Liver and a Broken Heart” as well as “This Piano Has Been Drinking”. This new track exhibits Waits’s familiar lyrical talent but with as savage as a twist as his “Trampled Rose” from a few years back: it’s heartlessly free of any sentiment, though still as darkly ironic as ever. And you can actually decipher the lyrics as he’s singing (well, mostly, and that’s a welcome change from too many of his records).

“Back In The Crowd”, a love ballad with Spanish guitar influence, is a heart-wrenching beauty of a song, sung with all the tenderness of a late ’50s or early ’60s masterpiece from the Roy Orbison or Gene Pitney catalogue of lost love and desire; it’s easily the match of Waits’ “Hold On” and reminds us that he is more than anything a romantic. In the same way that “Tom Traubert’s Blues” from Small Change or “The Heart of Saturday Night” revealed Waits to be one of those songwriters who generate deep swells of emotion in the listener, “Back In The Crowd” is a work of art that doesn’t show its construction. It’s so damned easy to get carried away by this music, and it’s very unhipster-like of one of the coolest guys around but as Marc Jordan so movingly sang a decade ago “this is how men cry”.

A deluxe edition of the album features bonus cuts “She Stole the Blush,” “Tell Me,” and “After You Die.” That will be the one to order.