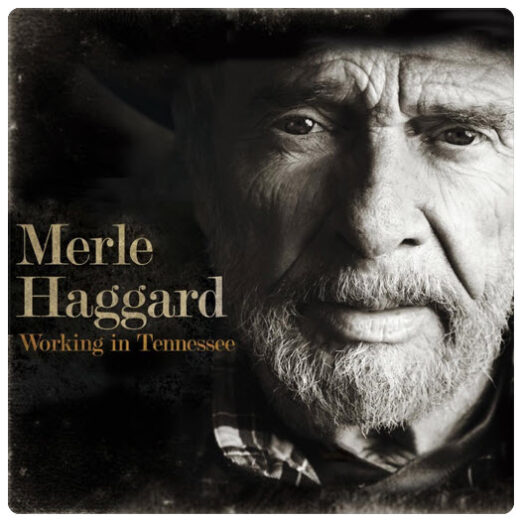 The iconic country music figure Merle Haggard has been plying his craft for more than four decades now, and with Working in Tennessee, his second disc for the venerated label Vanguard Records, delivered his strongest record in years. A Kennedy Centre Honoree, here he has penned several new tunes, chosen a couple of Johnny Cash classics, and recruited both Willie Nelson and his own eighteen year old son Ben to support him. The result is an unalloyed delight. The widely acknowledged “Poet of The Working Man” proves that 49 albums into his career he still has the mojo to make great records, and neither a short spell in prison nor fame has yet caught up with him.

The opening track is based on the Bob Wills fiddle tune “Don’t Let the Deal Go Down”, and sets the stage for all that follows: good-natured traditional countrypolitan music that in fact Haggard invented along with Buck Owens. The second track “Down on the Houseboat” is an evocative reminder of just how much other artists owe him, particularly Jimmy Buffett who trademarked the laidback feel that should really have been patented by Merle himself. “Cocaine Blues’, on the other hand, while a decent cover version, doesn’t quite match the Johnny Cash original.

That judgment is quickly erased by the next tune “What I Hate”, simultaneously a global and local take on the human condition, supported by Willie Nelson’s familiar nylon string guitar. That said, Merle fares even better with the Cash number “Jackson”, every bit the equal of Johnny’s. Then there’s “Sometime I Dream”, a confessional reminder of why people gravitate to country music in such numbers – for the unadorned truth of failed romances and foolish hopes.

The standout track, though, is “Too Much Boogie Woogie”, Merle’s curmudgeonly tribute to bygone stars of Nashville music, wherein the lyrics lament the present day state of country music and conjure up such luminaries as Connie Smith, Ernest Tubb, Emmylou Harris and Marty Stuart. Clearly passionate about the 1960s, Merle walks the tightrope of nostalgia and contemporary relevance, managing at the age of 74 to walk the talk.

Stellar playing abounds here, particularly on “Working Man Blues”, in which Willie Nelson contributes a great vocal and some scintillating guitar. And hot damn, Merle’s son Ben is in fine vocal form- if we were producers we’d have this kid making his own album right hot damn now.

Even if you’re only an occasional fan of country music, you owe it to yourself to hear this album. And if you’re contemptuous of the genre, think on this old saw: “a man needs a cage in which to be free”.

Highly recommended. This 2011 release is truly a modern classic of traditional country music.