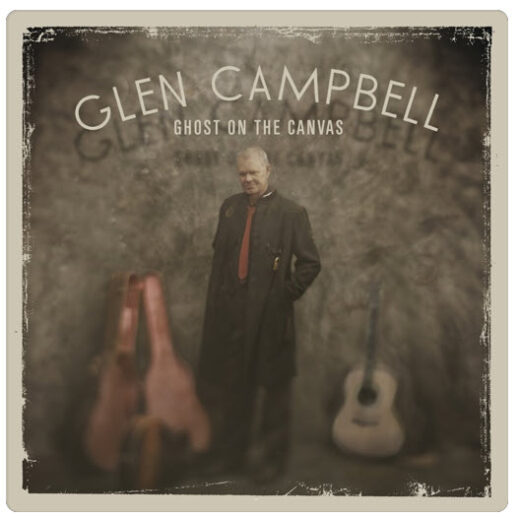 At the age of 75, suffering from the onset of Alzheimer’s disease, famed troubadour Glen Campbell has forged his finest and final album in Ghost On The Canvas – a heartbreaking work of genius that compares, and contrasts, with the Rick Rubin-produced last works of Johnny Cash that resurrected Cash’s career and his reputation. The same is in store for Glen Campbell, for his new work is one of the finest tributes to the human spirit ever recorded in popular music. To hear him sing “Nothing But The Whole Wide World” and “Hold On Hope”, to name but two of the standout tracks found here, is nothing short of a revelation and a God-given inspiration, even forgetting for a moment if one can, Campbell’s sure-to-ensue ending.

A farm boy from Arkansas, Glen Campbell began his musical career early in the late 1950s appearing on The Champs’s monster hit “Tequila”. In the early 1960s he went to playing some great guitar and contributing backing vocals to a string of big hits before venturing out on his own. As a member of Phil Spector’s Wrecking Crew, his work appeared on a surprising number of hits that featured Spector’s Wall of Sound. Glen also made a series of instrumental guitar records with such luminaries as Howard Roberts, played guitar on The Beach Boys’ Pet Sounds, and even toured with the group as a replacement for Brian Wilson. However, his biggest successes came with his soaring and majestic vocals on several Jimmy Webb compositions, most recognizably “By The Time I Get To Phoenix” and “Wichita Lineman”, arguably two of the most played and the best crafted songs of the Sixties. Campbell somehow drifted out of pop music into country fare, and even hosted his own television show ‘The Glen Campbell Goodtime Hour’ for a time. He did a few duets with the likes of Tanya Tucker, acted in a host of movies and then fell into obscurity and minor brushes with the law, mostly due to alchohol issues.

He has recorded more than 70 albums all told, but is best known for his singles, particularly “Rhinestone Cowboy” and “Southern Nights”, the latter being the most played jukebox number of 1977. However, none of these compare to the incredible vocal artistry he displayed with Jimmy Webb’s material. “Wichita Lineman” was notably selected by Mojo and by Blender as one of the greatest songs of the 20th century.

In 2008 Campbell returned to Capitol Records and released an album with the astonishing title Meet Glen Campbell, featuring tracks from the likes of Tom Petty, Jackson Browne and Green Day. Ghost On the Canvas might be considered a companion album, in that it features collaborations with Jakob Dylan, Chris Isaak and Billy Corgan of the Smashing Pumpkins. The title track was written by Paul Westerberg. It’s not just the knowledge that this is Campbell’s farewell to recording and touring that makes the current record so special; it’s the quality of the material and the command Glen has over his still-powerful, still heart-stirring voice, matched by some very moving snippets, experimental segues, and swirling production techniques that make this man sound so vital, so alive, and so luminous. And then of course, as one cut is poignantly titled, “The Rest Is Silence”.

Glen had a hand in writing four of the songs here and he is a fine writer but make no mistake, this is very much an album that commands your attention from beginning to end for its production values and the vocals. It has been lovingly assembled as a memorial to hope, failure and the courage to face one’s own fate. His collaboration with The Dandy Warhols entitled “Strong” is an amazing piece of work, and might well be considered the centrepiece of the album. Until, that is, one hears “There’s No Me Without You”, and ” It’s Your Amazing Grace” and the moving closer “Wish You Were Here.”

Fare thee well, Mr. Campbell, in your fight with Alzheimer’s. The world will treasure your career and your final triumphant masterpiece which will surely be a contender for Record Of The Year.