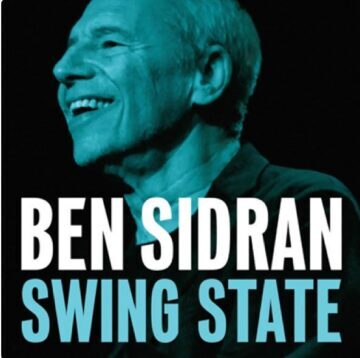 Swing State is my first all instrumental record. I’ve done instrumentals before but this is my first piano trio project. My favorite records when I was a kid were the trios of Horace Silver, Bobby Timmons, Bud Powell, and later Sonny Clark. The piano trio format was what first excited me. So circling back sixty-some years later I wanted to feel like those musicians felt when they played. I know I can’t play like them, but I can feel like them. That’s what Swing State is. ~ Ben Sidran

I’ve been a Ben Sidran fan going on several decades, having first discovered his keyboard, vocal, and sardonic style on the brilliant The Doctor Is In album back in the fall of 1977. At the time I was a budding entrepreneur addicted to music. A chronic record-buying habit had led me to co-ownership of a record and audio store with Dale, my best friend, a guy infinitely more musically sophisticated than I (at the time).

When Ben released The Doctor Was In, Dale made an executive decision. He bought up all we could afford of Ben’s new record, and played it constantly to our record and audio customers alike. The album sold like the proverbial hotcake.

The outstanding cut on the record was an instrumental entitled “Silver’s Serenade”, a cover of the famous tune composed by Horace Silver, originally released in 1963, featuring Silver himself and the terrific jazz trumpeter Blue Mitchell. Sidran talked Mitchell into recreating his work and the result is unforgettable.

As of 2022, Ben has become a legendary authority on jazz history and has released more than forty albums. All of them are far from ordinary. Here are a few standouts for those not yet acquainted with his undeniable groove. His 1996 outing, Mr. P’s Shuffle, is a fine example of his pianistic skills and his ability to make a song his own. In 2009 he released an exciting interpretation called Dylan Different, in which he showcased his inventiveness. A tougher-than-usual vocal style enhanced the material and proved once again that the brilliance of Dylan’s writing is often better served when delivered by others.

Subsequent releases Don’t Cry For No Hipster in 2014 and Picture Him Happy from 2017 are must-have albums. And now, at the venerable age of 78, Ben has released what may be his finest recording. In order to do so, he had to leave his Mose Allison-like vocal style behind and return to his roots, the music dating back to the likes of Horace Silver and Sonny Clark.

Swing State is a pleasure from beginning to end. The ’30s and ’40s standards material is familiar to every jazz piano devotee, but here is delivered with verve, panache and sheer delight. Sidran transforms virtually every piece with updated tempos, variations and dynamic accents that breathe new life into these classics. Accompanied by Billy Peterson on bass, and on drums his frequent collaborator, son and accomplished stick man Leo Sidran, Ben is at the peak of his form.

The upshot? – the listener can’t help but respond, and swing, to all of the intimacy and excitement of a great piano trio at work. Leo’s cymbal work is first rate, while the deep, natural bass groove set up by Peterson is always on the mark. Sticking to the keyboards, Ben brings his full talent to bear on the music, achieving here a subtle grandeur that renders the long shadow of Mose Allison a fond but distant memory.