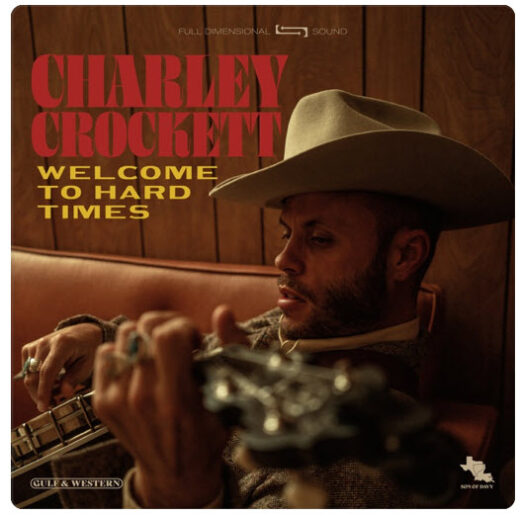 Charley Crockett’s new album is a vintage affair, harkening back to the production values of the late 1950s and early 1960s, when the voices of Ray Price, Marty Robbins and Patsy Cline dominated the American country music scene. Upfront vocals sung with Crockett’s trademark heartfelt sincerity, lyrics plain and straightforward, backed by superb guitar and a steady beat: Welcome to Hard Times is an album that could have been made anytime in the past 50 years.

Crockett has recently recovered from open-heart surgery, so it’s gratifying hear that this popular Afro-American country music star is back in top form. He set out to make what he calls “a dark Gothic record”.  The title of the record references the 1967 western film of the same name that starred Henry Fonda. The work was based upon the novel by famed writer E.L Doctorow. Crockett brings his own hard times to bear in the creation of the songs: his wrongful criminal conviction, his inside information on prison life, and his own survival of congenital heart disease.

A surprising element is the introduction of rock and blues instrumental flavors injected into the bluesy “Rainin’ In My Heart” (not at all the Buddy Holly tune). No question that Charley is credible across more than one genre.

Two upbeat numbers relieve the somewhat sombre tone of most of the material. “Run Horse Run” is an up-tempo aural delight with a terrific steel guitar solo. “Paint It Blue” relates the history of a man perpetually on the run, but one relentlessly cheerful about his fate.

The real winner here is “Heads You Win”, an old-fashioned country weeper worthy of anything George Jones recorded or Hank Williams wrote. It’s pretty much an instant country classic, delivered here with self-deprecating irony – “heads you win, tails I lose”.

Crockett is 35 years old, and has delivered an astonishing output these past six years since he first appeared on the scene in 2015. By our count, this is his eighth album, and each of them has a distinct flavor, characterized by an eclectic approach that echoes his interest in hiphop, blues and rock.

Welcome to Hard Times is a vital record, delivered in style. Highly recommended.