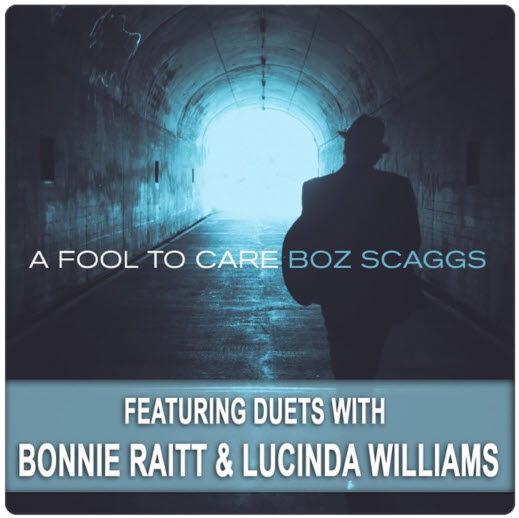 Boz steps out with stunning duets and adventurous new musical arrangements, showing he’s still at the top of his game.

From the opening notes of his new record, Boz Scaggs confirms there is no one on the music scene from the late 60s/70s who still has the vocal and instrumental chops that Mr. Scaggs displays in spades on his new outing, entitled A Fool To Care. He has teamed up once again with noted producer Steve Jordan, as well as the same rhythm section that performed so well on his last album, Memphis. In fact, Jordan himself is a first-rate drummer, percussionist, and background vocalist who for this listener has enabled Boz to reclaim his musical adventurousness in terms of arrangements. The Memphis album was remarkable for his variety of material and approach to covers and Boz’s originals, and A Fool To Care continues in this vein. The cover of the record makes prominent mention of duets with musical luminaries Bonnie Raitt and Lucinda Williams.

The material includes songs by The Band, The Spinners, Al Green (the great track ‘Full of Fire’), as well some strong new originals, the best of which ‘Hell to Pay’ features a duet with Bonnie Raitt. ‘Hell to Pay’, a tale of legal and political corruption, is the real standout track on the album, not only for the seamless way his voice blends with that of Bonnie’s, but also for her terrific slide playing. It’s the strongest tune either have done in well, years (much as we liked both of their most recent recordings). In a recent interview, Boz had this to say about how he came to work with Bonnie on ‘Hell to Pay’.

“I really wanted to do a few duets on this record, and Bonnie is one my favorite artists in the world. It just so happened that the opportunity to work with her came up, and it was a great fit. It was a really special session because even though the two of us had known each other for some time, we had never worked together before. Bonnie came to my house with her guitar, and we spent the day together and just worked it out. It was great making music, but just getting to know her well was pretty special.”

What distinguishes this new record, and strengthens it immeasurably, are the arrangements which display some wonderful musical imagination. Boz has always been an elusive character – meaning, multi-layered – and this outing is no exception, marking A Fool To Care among his finest recordings. Go back to his landmark Boz Scaggs and Band album from 1971 for instance, or his But Beautiful album from 2003 for a full appreciation of his musicality and subtlety.

The accordion, for example, on ‘Last Tango on 16th Street’, the Latin rhythms on ‘I Want To See You'(along with some very tasty keyboards), and the subdued, understated vocals on ‘Love Don’t Love Nobody’ confirm that Boz is far from content to rest on his considerable laurels.

There is no better singer of white blues/ R&B/soul material around than William Royce Scaggs, who this year celebrates fifty years since the release of his first solo album Boz – a record still worth checking out, btw.