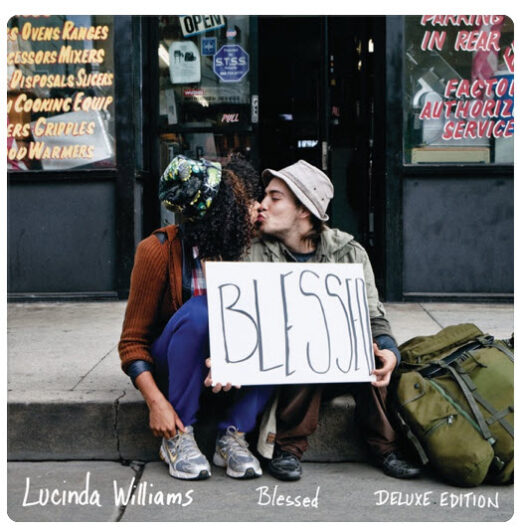 Lucinda Williams has long been celebrated in several circles as our finest songwriter. With her new album Blessed she solidifies her reputation with a batch of finely-crafted songs that will also earn her new fans. She’s a perfectionist – the album was to be have been released almost six months ago, but she grew dissatisfied with the mix and called in Bob Clearmountain, who took the marvelous roots rock production of Don Was and brought his usual startling clarity to Blessed. It’s her tenth studio album and one of her finest.

Lucinda is 58 years old now, a veteran who spent a dozen years or so kicking around Austin with the likes of Jimmie Dale Gilmore, Joe Ely and Butch Hancock (the three kings of West Texas music) before moving to Los Angeles in the late 1980s and teaming up with legendary producer/guitarist Gurf Morlix. The self-titled album that emerged was and is a masterpiece of country-blues simplicity; it’s one of those must-have albums that gain more importance with each passing year.

Her association with Morlix ended when in her relentless quest for change and evolution she teamed up with Steve Earle to assist in production. She simply didn’t want to repeat the first few albums, which though successful were locking her into a corner. Earle didn’t change her material much, but he did bring a rougher sound to the mix and coaxed out a snarl and a new attitude from Lucinda that brought her a wider audience. Morlix hasn’t spoken to her since.

In an interview with The New York Times last year, she spoke about moving to the coast from Texas.

“Nobody knew what to do with me. People in Los Angeles told me it’s too country for rock. In Nashville, they said it’s too rock for country. Which is what that whole Americana thing is all about.”

She has spoken humbly about her early work and how often she compared herself to the great songwriters of her youth and found herself wanting. When TIME Magazine declared her “America’s finest songwriter” in 2002, she gained a little perspective. Now she’s the legend that other aspiring writers look to for inspiration, and the only woman to reach the plateau where the works of Bob Dylan, Leonard Cohen and Tim Hardin reign supreme over all others.

Lucinda has the cry in her voice that can move a listener the way that Emmylou Harris does, but she’s also got that bluesy fire that confounds the country audience. She has the songwriting power that will absolutely require publication of a book of her lyrics. In fact, that book is long overdue. And she’s one hot stage performer who was known for blowing away powerful acts like The Cowboy Junkies when she opened for them. If she had had the guitar-playing chops of Bonnie Raitt, she would have been a superstar. That said, no one else in Americana music has bettered the collective works of Lucinda Williams.

The road has taken its toll on her personal life, with both the death of her mother and her involvement in more than one abusive relationship clouding her career. She’s now in a new marriage and has said goodbye to her troubles. That’s the overriding theme of this record and presumably the reason for the album’s title.

On first listen, we like this record a lot. If you haven’t heard her for a bit, it’s time to come back. You’ll find she’s still The Queen of Heartbreak, but she’s far less mournful than Essence. In short, she truly delivers on the hopeful notes that marked her excellent 2008 album Little Honey; we think this album marks a return to the raw-boned tone and emotional complexity that brought her a Grammy in her long-past winner Car Wheels On A Gravel Road.