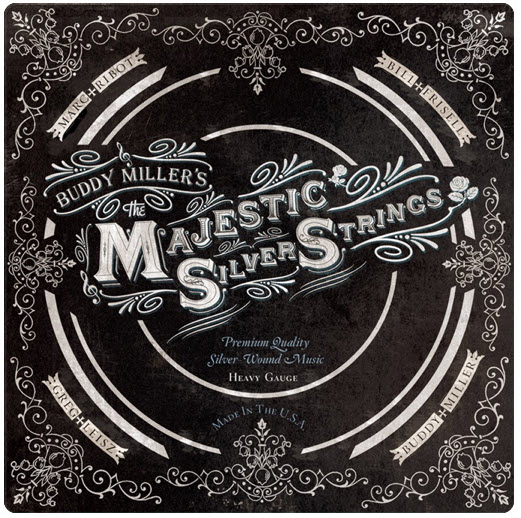 With The Majestic Silver Strings Buddy Miller has made one of the great guitar albums of all time; it just happens that most people will call this music ‘country’, but in keeping with his magnificent range of talents, Buddy is much more than country. Guitarist extraordinaire, songwriter, producer, vocalist, and arranger, this man works in roots-rock tinged with country, folk and gospel. That’s why people like Robert Plant, Lucinda Williams and Steve Earle work with him and under his sympathetic production create some of the finest recordings of their respective careers.

For this new album Buddy assembled the jazz guitar great Bill Frissell, studio wizard Greg Leisz and the terrific Marc Ribot who has worked for years with Tom Waits and a host of others. Then the four of them began “messin around with some old country songs” as Buddy put it recently. They brought in Shawn Colvin, Emmylou Harris, Patty Griffin and Lee Ann Womack as well as Buddy’s wife (and astounding songwriting partner) Julie Miller as guest vocalists. The result: one of the records of the year in any genre.

Standout tracks include the opener Why Baby Why with Buddy providing a delicious vocal on what was the first hit for George Jones back in 1955. Lee Ann Womack does a convincing old line weeper version of the late ’50s Marty Robbins number Return To Me and also provides a delicate but polished confessional on Meds, a stunning angst-filled number written by Marc Ribot. Lee Ann is one of the great country singers of all time, and here she proves again why there are only a select few who can deliver a country song as well as she does.

There are some surprising takes on this album as well: Cattle Call, a number associated with Eddy Arnold gets a marvelous treatment featuring the guitar magic of of Frissell and Leisz, while Buddy brings mystery and unearthliness to Dang Me, proving Roger Miller was a much greater songwriter than we thought and that it is possible to transform what was a comic number into something strange, bold and exciting. Here ‘Chococolate Genius’ (Marc Anthony Thompson) combines a scorching vocal with country-blues and a suggestion of hip-hop. Definitely not country and definitely magnificent.

The album closes with a Buddy and Julie duet on a tune co-written by Julie Frissell: God’s Winged Horse and this is a naked and tender finish with a spellbinding vocal.

Traditional country hasn’t sounded this fresh or contemporary for a while, in fact not since Buddy’s previous album, an masterful recording of duets with his wife Julie from 2009 entitled Written In Chalk. They swept the Americana Awards that year and we predict a similar outcome for The Majestic Silver Strings.

Highly recommended and a very nearly perfect recording by what can justifiably be called a supergroup.