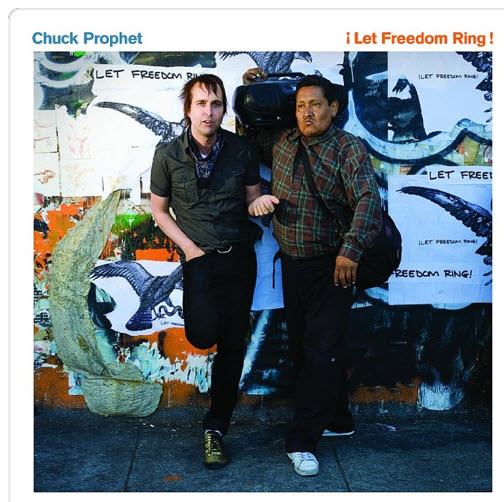 I can‘t get the song “Leave The Window Open” out of my head, and that‘s a good thing. It‘s one of the best songs written in the last ten years. As a celebration and affirmation of life, love, and the beauty of the intertwining of the ordinary with the sublime, this song ranks near the top. I‘d love to hear what Van Morrison at his peak, or Beck, could do with this number, although either of them would be hard-pressed to surpass Chuck Prophet‘s own interpretation.

Prophet should be a major star, and yet he probably is destined to remain a niche figure: as talented as Warren Zevon and just as quirky. If you love Zevon, Dylan, and Lucinda Williams, you owe it to yourself to listen to Chuck Prophet.

Upon its 2010 release, Chuck referred to Let Freedom Ring! as “a political album for non-political people”. It was recorded in Mexico in 2009 inside a studio that was state-of-the-art fifty years ago. The songs are fresh, the lyrics are alive with unforgettable imagery, and the music is as sticky as anything going on in any genre. It‘s a mix of hard-driving rock and roll, exquisite balladeering, and daring country somewhat reminiscent of Lyle Lovett: more than the sum of its parts and as potent a mix of styles as I‘ve heard in years. It‘s one of the few albums from the past five years or so that hasn’t lost its place in the constant rotation of the new and old on my playlist.

Standout tracks, beyond the instant classic “Leave The Window Open” include the title track as well as “You and Me Baby (Holding On)” and the memorable “Barely Exist”, both of which chronicle the life and hard times of the less fortunate who have suffered greatly during the 2008 economic downturn that continues its disastrous effects even seven years later. I take it this is what he means by his self-proclaimed political stance on this album.

A hot backing band supplies something increasingly rare in contemporary music: the ability to build a tune, the talent to explore dynamics while allowing Chuck space between the notes. Chuck is not merely a good singer; he is a great singer. He may be well past his forties now but after 19 years of recording, and 11 solo works, he finally came into into his own with this album as a huge, if not widely recognized, talent.

Get this record. You won‘t regret it but you may find yourself searching out as much of the rest of the Chuck Prophet catalogue as you can get your hands on. He‘s that good.