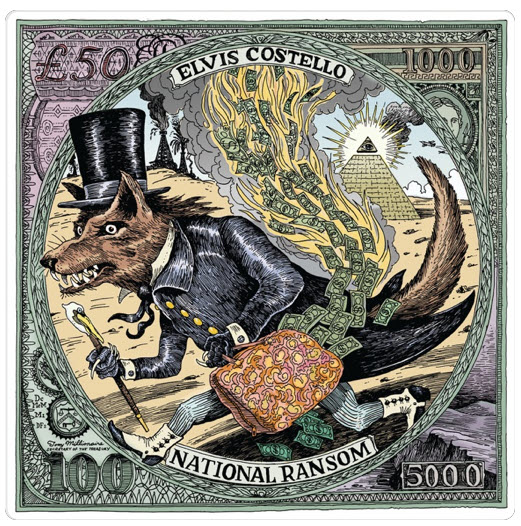 The new album by Elvis Costello , National Ransom, marks a return to the style, instrumentation, and lyrical qualities that made King of America so delightful. This has more than a little to do with the producer T-Bone Burnett, who headed up that former album so well. As Costello himself explained in a recent interview, Burnett simply knows what he’s doing – both with song choice and song order.

The opening tune is Costello’s take on the greed of financiers – his own view of Wall Street, you might say, and it sets the tone for the rest of the album, which is a collection of short stories set to music. Costello seems to have regained his lyrical footing with this record, making it, in his own words “clearer and bolder” than anything he’s done recently. Earlier in this decade he wandered into both jazz and classical music, and while I for one found those records interesting, those explorations into unnatural territory were far from compelling. Here he’s back on track, reined in, I suspect, by Burnett.

Guitarists Marc Ribot, Jerry Douglas, and Buddy Miller help out, as do members of the Imposters and Sugarcanes. Some of the record was made at Nashville’s Sound Emporium, which may explain the decidedly country flavour of much of this outing.

Costello says this is his best record in years. We tend to agree. A few early listens tell us that the title track, as well as “That’s Not The Part of Him You’re Leaving”, will be the major attractions here. Overall, a solid effort, but not the masterpiece he has in him.