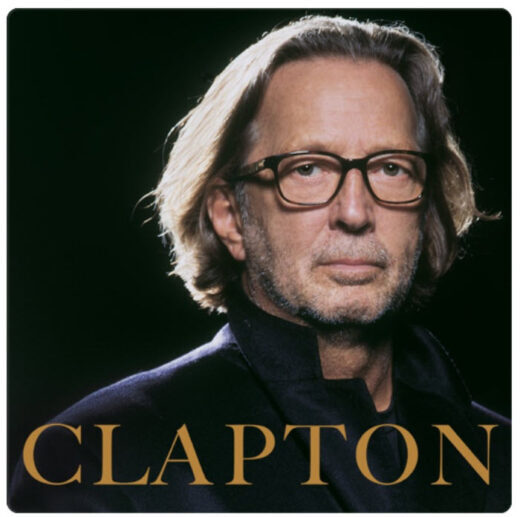 “Clapton” is the Guitar God’s 19th solo album and in the year of his 65th birthday, Eric has called on several guest stars to assist him in looking back. “Most people, he says, “are trying to figure out, ‘How do I get in the fast lane, going that way?’ I’m going in the other direction – I want to find the oldest thing to do.” Who else feels the same way? – Doyle Bramhall II, a gifted guitarist and producer, along with one of the greatest drummers of all time, Jim Keltner, as well as such luminaries as J.J. Cale, Sheryl Crow, Wynton Marsalis, Allan Toussaint and Derek Trucks, all join him in this exceptional production.

Eric Clapton gives us a musical history lesson in this record, and there is something for everyone here: songs from the likes of of J.J. Cale, Johnny Mercer, Hoagy Carmichael, and Irving Berlin are featured, as well as some terrific blues numbers from lesser-known but equal talents. His playing is characteristically elegant, strong, and deeply felt. The stellar team of players he has assembled here are all virtuosos independently, any of them capable of leading a band and commanding a stage, yet their ensemble playing sounds like they have been at it together for years. On this record everyone shines, just as though Clapton has decided that he no longer needs to showcase himself. This isn’t evident on first listen, but becomes clearer with every audition that Clapton and his band members serve the music, rather than the music serving them. This is what distinguished his work on the Unplugged and From The Cradle releases, and now he appears to have made this practice a way of life.

The album begins with the blues, an old tune by Lil’ Son Jackson called Travelin’ Alone and ends with the an incomparable version of the pop standard Autumn Leaves that Mercer adapted in 1947 from the French song entitled “Les Feuilles Mortes” (The Dead Leaves). In between he takes us to the Tulsa blues of J.J. Cale from the early 1970s with River Runs Deep and Everything Will Be Alright. Cale’s songwriting has proven a rich treasure trove for Clapton over the years, notably with the best-selling tunes After Midnight and Cocaine, and no one interprets Cale as well as Clapton. Diamonds features some wonderful brushwork from Keltner, as well as backup vocals from Sheryl Crow.

Additional standout tracks are That’s No Way To Get Along, written decades ago by the blues guitarist and singer Robert Wilkins, who later became a preacher and changed the lyrics of this song, ashamed as he was by the “unholy” sentiments expressed. The Rolling Stones did a rousing acoustic version of this song on their album Beggars Banquet, calling it Prodigal Son. Clapton’s version is replete with horns and piano, backed by Keltner on drums, Cale and Clapton on vocals and guitar, with solos by Doyle Bramhall II. I have to mention as well the slow sizzling performances on the track Can’t Hold Out Much Longer, that features some great blues harp playing by Kim Wilson of the Fabulous Thunderbirds. This song is a restrained barnburner that seethes with sex and romantic despair – just what the blues is all about.

Many of these tunes have been performed by Clapton in concert over the years. He’s not afraid to introduce his favorite old tunes to his audiences, who know that his live shows often bring the unexpected. When you’ve had as many hits as he has, it takes courage to play a long-forgotten number in public when most of the audience is there to hear only the familiar tunes they remember from 17 albums ago. Clapton keeps himself fresh by keeping us fresh. I am thinking here of his cover of the Lane Hardin number Hard Times Blues – unknown to most listeners of any age these days but a terrific tune that features an exquisite electric solo. Hardin recorded only two sides for Bluebird in 1935, the flip side being the better known California Desert Blues. Clapton has brought forth a gem here, and if there are any more Lane Hardin tunes around somebody better record them, quick.

We’ve heard some amazing work from some long-established artists this year, and this Clapton is up there with the best of them.