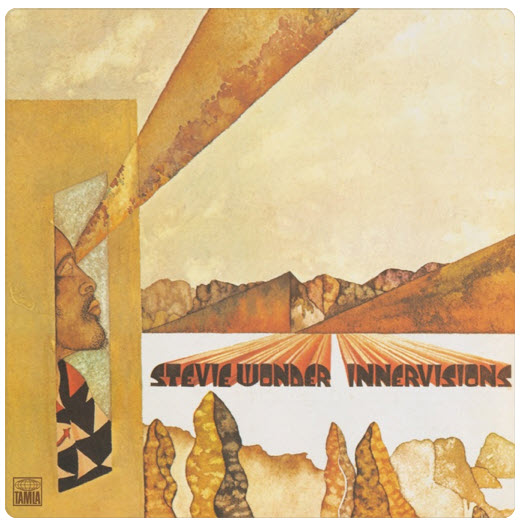 Stevie Wonder‘s talent was obvious to everyone from the time he was old enough to pick out a few notes on the piano. While kids his own age were trying to master the alphabet back in elementary school, young Steveland Hardaway Judkins Morris was acquiring the chops of musicians three times his age. His second record “Fingertips Part II” was made in 1963 when he was around 13 years old and it made him a star. Motown Records was hesitant about having him in the studio because he was blind; in their initial stupidity they thought he might trip over the cables or bump into the piano. They didn‘t know what they were dealing with, then or a few years later on his 21st birthday when he told the management he wanted total creative control over his records. This was tantamount to mutiny as far as Berry Gordy was concerned: Motown Records was the supreme dictator over the lives of everyone on their roster, down to what colour socks and what coordinated outfits their obedient charges donned. In the end with Stevie, they had no choice and they acquiesced to his demands for artistic freedom.

Stevie released five brilliant albums in a row in the 1970s:  Music of My Mind, Talking Book, Innervisions,  Fulfillingness First Finale, and Songs in the Key of Life. Such a consistent output in such a short time has not been equaled by any other musician. Strong statement, but I‘ll stand by it. With those albums he revolutionized American music, bringing the full potential of the synthesizer to fruition and creating songs as complex, as hard to sing, as hard to play, and as memorable as those of any musician anywhere on the planet working in any genre. More than that, he realized all the promise of earlier black artists who were politically conscious. I am thinking here of Sam Cooke and Marvin Gaye, both of whom profoundly influenced Stevie .

The Sixties and Seventies were a time when music assumed an importance it had never had previously; protest songs became part of the musical mainstream, not just through songs like Sam Cooke‘s “A Change is Gonna Come” and Marvin Gaye‘s “What‘s Going On”, but also the songs of Dylan and Peter Paul & Mary and a host of others. Stevie‘s epic contribution to this genre is “Living for the City”, a tale of a young black man who goes to the big city, gets innocently involved in a drug bust on the street, and ends up in jail for ten years. The song is riveting in its intensity, its message, and in its relentless groove. It won Best R & B song in the Grammys for 1974. It still stands up, 40 years later, for the power of its conviction and for its relentless indictment of a justice system that to this day puts more uneducated black men in jail than can be reasonably understood. Ray Charles recorded a searing rendition of this song that for all its power does not match the strength of Stevie‘s original.

Now the last thing Motown Records was interested in was political controversy. Motown was a hit factory, and Berry Gordy was perhaps the original stoker of “the star-maker machinery behind the popular song”. In Stevie Wonder he had something beyond his control that did not exist elsewhere in his stable of artists: a socially conscious musical genius who wrote lyrics, composed music, produced, and won multiple Grammy awards without any assistance from Gordy.

I have to mention Stevie‘s wonderful singing as well. He sounds tough and angry on “Living for the City”, in keeping with the message of the song. And then there are the lyrics, in which he manages a splendid marriage of sympathy, specificity, and moral outrage. Not to mention his incredible keyboard work on the synthesizer that he had played a major part in developing. This brought a new sound to American music, tougher and less sentimental than the usual piano or Hammond B3 sounds that had dominated keyboard playing to date.

As if that weren‘t enough, on the  Innervisions album he continued to display a romantic side that has seldom been matched. The writing of “All is Fair in Love” would have made many a career. For me it is the finest love song of the last forty years. As soon as it was released it was claimed by a number of other artists for their repertoire, notably Cleo Laine who at the time was regarded as one of the best singers ever to come out of Europe. She recorded this song for one of her top selling albums in the 1970s – A Beautiful Thing– and her version is a perfect Broadway singer‘s interpretation of what was never intended to be a Broadway song.

And as for Stevie‘s later stuff, his single  “What The Fuss” was bloody marvelous. He hasn‘t lost his way.