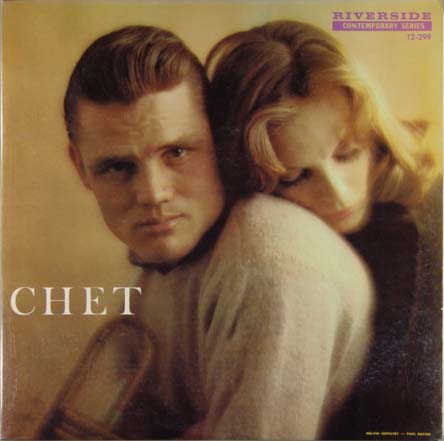 Recorded in only two sessions, one on December 30, 1958 and the second on January 19, 1959, this collection of lyrical ballads shows Chet Baker at the top of his form, supported by some of the very best sidemen in the business: Pepper Adams on baritone sax, the young Bill Evans on piano, Paul Chambers on bass, Connie Kay on drums, Herbie Mann on flute, and Kenny Burrell on guitar.

Chet is an essential Baker album, both for the warmth of his playing and the superb accompaniment of his backing musicians. The selections are from composers such as Cole Porter, Rodgers & Hart, and Dietz-Schwartz, traditional fare for popular and jazz musicians, but done here in a reverent and romantic style. Not to say that the group doesn’t swing, but the low key approach and the unusual combination of trumpet, baritone sax, flute and jazz guitar make for a uniquely pleasurable outing. The album is strictly instrumental, so those looking to audition the controversial singing talents of Mr. Baker need look elsewhere. Chet’s lush trumpet tone is fully on display and it’s more than gratifying.

It was his tone that brought him to prominence in the early 1950s as a member of the original Gerry Mulligan Quartet. Baker and Mulligan shared more than talent as musicians; their mutual interest in hard drugs such as heroin led them both to prison at various times in their lives. But in 1959 Baker was at the height of his career; not yet thirty, movie-star handsome, and winner of several prestigious jazz awards, beating out such luminaries as Miles Davis and Clifford Brown on more than one occasion.

Following several recordings made for the Pacific Jazz Label, notably The Trumpet Artistry of Chet Baker, he made an incredible seven albums in a span of just two years for Riverside Jazz, widely considered at the time to be the only serious contender to Pacific Jazz and Blue Note Records. Chet is his penultimate record for the label, and the one to have, if only fully to assess his instrumental prowess minus the distraction of his penchant for singing, which was both widely celebrated and roundly criticized.

Here he is “the prince of cool”, the absolute master of his distinctive one octave approach that is immediately recognizable from the opening notes of “Alone Together”. On two numbers, he sets aside the sextet backing him and works with bass, drums, and superstar guitarist Kenny Burrell. Bill Evans exhibits a beautiful, subdued approach on piano throughout, while Connie Kay’s note-perfect drumming and eloquent brushwork recall his substantial role in the success of the Modern Jazz Quartet.

Moody, lush, dead slow and highly evocative, this may well be the most romantic album ever made. Still available on Riverside Vinyl reissue, with absolutely gorgeous sound.