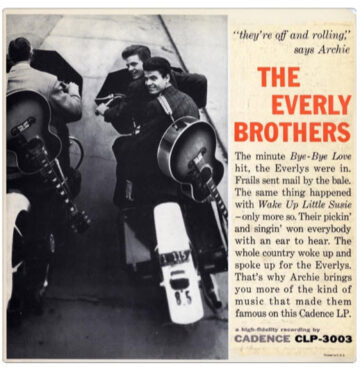 Phil and Don Everly not only possessed the greatest vocal talents of any rock/pop duo in the past several decades, they were outstanding songwriters and guitar players extraordinaire. They’ve been acknowledged as major influences on everyone from Simon and Garfunkel to The Beatles. Lesser known is the role they played in the development of country rock and the introduction of authentic folk songs into mainstream American music. They’re not only the forerunners of such acts as The Byrds, The Eagles, Gram Parsons, but they almost single-handedly made the current phenomenon of roots music possible. And if there’s any proof needed of that, we need listen no further than three of their outstanding albums: The Everly Brothers (1958), Songs Our Daddy Taught Us (1958), and the seminal country rock album Roots (1969). Each of these albums reveals how closely the Everly Brothers remained to their heritage, and each of these albums we consider to be Must Have recordings. Before we tell you why, let’s recount some of their early history.

Phil and Don were the sons of noted country singers Ike and Margaret Everly. Ike is a fascinating case, a miner out of Kentucky who was such a gifted and innovative guitar player that he taught the virtuoso Merle Travis his unusual thumb-picking techniques. Ike was a collector of folk and country music, a self-taught musicologist who gathered ballads, folk songs, cowboy tunes, and Scottish-Irish classics. Shortly after Don was born in 1937, Ike packed up the family and moved from Brownie, Kentucky to Chicago to pursue a career in radio and live performance. In 1944 they moved to Shenandoah, Iowa. By 1949, when Don was all of 12 and Phil was 9, the boys were performing on radio with their parents. In 1953 the family moved to Knoxville. The boys were preteen prodigies, learning the high and lonesome material that Ike featured on his show. By 1955 Phil and Don were beginning to create their own style of music and were signed to Columbia Records. They cut four tracks. Don was already a budding songwriter. Their first two singles “Keep A’ Lovin’ Me” b/w “The Sun Keeps Shining” bore no resemblance to the chart-busting “Bye Bye Love” that emerged in 1957. So what happened?

Sometimes the bad news turns out to be good news. Columbia Records dropped them for lack of sales. Phil and Don were introduced to Wesley Rose, who persuaded Archie Bleyer of the new label, Cadence Records, to sign them. And of course Rose himself was at the helm of Acuff-Rose, the great publishing firm, where established staff songwriters Boudleaux and Felice Bryant were writing one masterpiece after another. The Bryants wrote “Bye Bye Love” and the Everly Brothers recorded it on March 1, 1957. It’s not an overstatement to say that music has never been the same since. The Everlys united rock with country. They were young, they were astonishingly good-looking, and they sang like angels. And they had the Bryants, who not only gave them “Bye Bye Love”, but this killer collection: “Wake Up Little Susie”, “All I Have To Do Is Dream”, “Bird Dog”, “Devoted To You”, “Problems”, and “Take A Message To Mary”.

They were anything but a studio creation, however. Don Everly wrote the unforgettable “Til I Kissed You”, as well as “So Sad To Watch Good Love Go Bad”. Phil Everly wrote “When Will I Be Loved”. On their first album was a song of their own composition, so brilliant that The Everlys chose to re-record it for their 1969 Roots album. The song is called “I Wonder If I Care As Much”. On the first album it’s a slow-burning acoustic wonder, a throwback to their country roots that’s completely out of place on a record people bought to hear “Bye Bye Love”. It never got the attention it deserved, until they recreated the song in a psychedelic version for the Roots album. It’s not often a cover by the original artist is improved, but here they not only re-imagine the song, they complement and bookend the original so beautifully that the two versions become inseparable, distinct but wholly related. And with it they moved music into the 1970s. Make no mistake, the Roots album was as influential among singer-songwriters as any album ever recorded. To contemplate the source as being The Everly Brothers beggars description, for the Everlys were viewed by the late ’60s as has-beens, notwithstanding the fact that they were barely into their early thirties.

One more miraculous thing happened to Phil and Don in the late fifties, and that was their decision to record the album Songs Our Daddy Taught Us in August of 1958. Heralded worldwide for their sweet and sex-drenched rock and roll, they decided to make a roots album. Seems they couldn’t get Kentucky out of their minds, or their devotion to the songs they had learned from their father. Songs such as “Roving Gambler”, arranged by Merle Travis, and the old English folk song “Barbara Allen”, arranged by Ike Everly, as well as “Kentucky” itself, set the tone for what has to be the earliest example of young popular artists choosing to record material that completely contradicted their public image. The album is more than magnificent; it is also a tribute to such artists as the cowboy singer Carson Robinson, the singer and actor Tex Ritter, as well as the Blue Sky Boys, who are often been cited as perfection in two-part harmony.

Lest you think that the Everlys are altogether too tame for you, or that you already all there is to know about them, you need to check out their early ’60s classic “The Price Of Love”, which has since been recorded by many other artists, but never so well, so hard-edged, so movingly, and so engagingly as by Don and Phil. Their live version is simply unmatchable in its intensity, and almost unbearably beautiful in its execution. “The Price Of Love” is the Everlys at their best, simultaneously controlled and wanton in their talent.

This hardly ends our discussion on the importance of the Everlys. In fact, it’s the beginning…