The Everly Brothers ‘All I Have To Do Is Dream’ 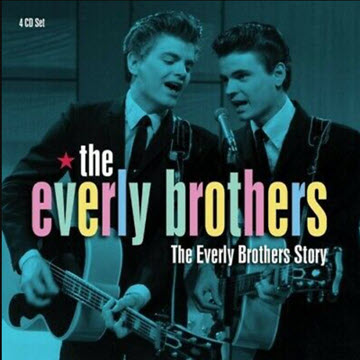 Has there ever been a more unheralded influence in rock than Don and Phil Everly? An influence on The Beatles and The Beach Boys, admired by Dylan and Lou Reed, they were also a global pop behemoth in the early 1960s. Even today their records chime resplendent with angelic harmonies that rival (imo) those of the Wilson brothers. Even as I grew up on an ’80s rich diet of pop and rock, the Everly Brothers were a near daily presence in my life. My mom must have had dozens of cassettes and LPs by similar artists from that era.

Nostalgia was big business in the late ’80s; you couldn’t turn the television on without some advertisement for a compilation of the biggest names and songs of the ’50s or ’60s. People still cried about “the day the music died“. And Elvis, lord almighty, was seen everywhere from Rio to Timbuktu. To my mind, Bryan Adams and Buddy Holly weren’t that different from one another. And the Everly Brothers? Well, they were the first guys in suits that made an impact on me. They had a flash and a charisma that never seemed to be affected. They seemed like ordinary, average guys…until you heard them sing. There was something holy about the way they sang.

Like many artists of the time, the Everly Brothers rarely wrote their material. This song was no exception. Their gift was transforming someone else’s words and chords by putting a purely Everlian spin on it. They were mountain boys who helped in no small measure clear the way for the fusion of country and rock that bands from The Byrds, The Eagles, Tom Petty and R.E.M. would all profit from. The scope of the Everly Brothers reach is truly awesome. And for me, out of their complete catalogue, one song lords above the rest. Ranking fourth on my list of personal faves is “(All I Have to Do is) Dream”.

A number one hit in 1958, “Dream” represents the apex of the Everlys’ career, a gem of pure delight.

Simply put: if you have an ear for melody, if you crave harmonies, if you jones for Pop…. then the Everly Brothers are as close to heaven as music gets. They were never a cool-looking group, even if they partied with Warren Zevon and consumed God only knows what. But the lack of cool factor is irrelevant. They have the honeyed tones of angels, something even stalwarts of cool like Dylan, Lou Reed and Johnny Cash could never be said to have.

With the Everly Brothers, one is given a look back to an era of naiveté, a middle-American core of values and mores that seems so foreign today. This is soft rock, not that Eric Carmen shite. The Everlys are not hard-rocking a la Chuck Berry, but their contributions to pop and rock are no less seismic. At a time when singles were king, barely scraped the two-minute mark and more often than not were about wholesome things like milkshakes, cars, surfing, and girls “Dream” wove its way into the cultural fabric as one of the premier ballads of the 50s. Time has not dulled or diminished its beauty; “Dream” is as ageless as the Mona Lisa.

The Everly Brothers stand as the critical link between rock’s early tutti frutti and Tin Pan Alley days into the folk-infused consciousness rising of the mid-60s, a spirit shared by Everly acolytes such as Dylan and The Beatles. With Dylan, the meaty wordsmithing of folk gave rock music significance and allowed rock to evolve from a light frothy entertainment to a world-changing, culturally dynamic art form. The acolytes did more to change the landscape of pop; they never would have done so without first attempting to out-Everly the Everly Brothers.

None of that matters though when listening to the Everly Brothers. They rarely receive the praise that the Wilson brothers or even the Bee Gees are afforded, and that is a shame. They could sing in the rock, country, rhythm and blues and gospel genres with nary a diminution in soul. They’re one of the greatest acts of the twentieth century, and this article is an attempt to shine a light on their majestic catalogue in the hopes of reminding people about the finest duo Kentucky ever produced. (Yeah, you heard me, fans of the Judds).

My early love for the Everly Brothers was provisional in my later love for R.E.M., who famously covered this very song in the late 80s. If that isn’t a signifier of their lasting influence, their song writing prowess, then I don’t know what is. With the assist of the Everlys, my world would open to everyone from the Bee Gees, the Pernice Brothers, Pete Ham and others. The vulnerability in their music, the hard-boned earnestness of their roots and the flavourful production of their recordings make the Everly Brothers catalogue one of the richest. Heaped with as many hits as James Brown, it is disconcerting that monuments have yet to be erected for Don and Phil along every dusty road from Kentucky to Nashville, New York to Mesopotamia.

My fear? That the current generation, those who think Steve Jobs is the inventor and pioneer of all music from Beethoven to Bruno Mars, will bury the Everly legacy in a ditch. May this appreciation be a reminder of just how crucial their music has been and forever will be.