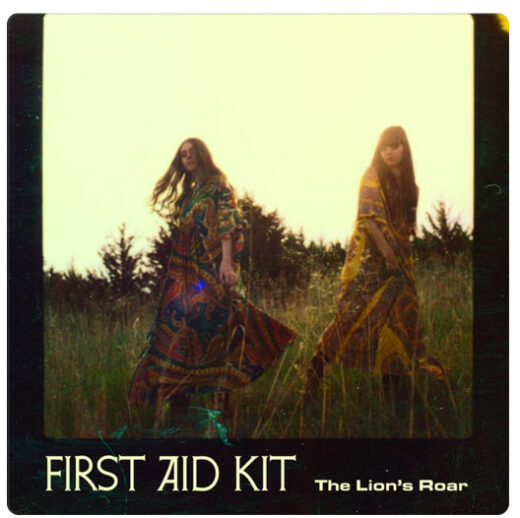 The Lion’s Roar is the second full-length album by Sweden’s First Aid Kit, and its title is more fitting than most. Sisters Klara and Johanna Söderberg have released an unqualified masterpiece, and though the record will engender the inevitable comparisons with Fleet Foxes, these two have a sound all their own. And a powerful sound it is, with harmony singing the like of which can only come from sisters, recorded way down deep but articulated clear as crystal, each voice individually beautiful yet somehow inseparable from the other.

Their 2008 cover of Fleet Foxes “Tiger Mountain Peasant Song” garnered an enviable 2.6 million views. It was recorded outdoors in a forest environment, and even after several viewings retains its spacey, moving and startling qualities. Scroll down below if you haven’t seen it; their brilliance was immediately obvious. Their first album The Big Black and Blue has been one of our faves since it came out a couple of years back, and their sophomore album, due out this month, fulfills all of the promise, and more, of their earlier work.

The title track opens the album, and it’s a big sound, with verses only slightly less glorious than the chorus:

The second track, “Emmylou” is a wonderful tribute to some of the great country music duets (Emmylou Harris and Gram Parsons, June Carter and Johnny Cash) and is a reminder that despite growing up in Sweden, the Söderberg sisters are essentially musically based in Americana. Folk, country, and the singer-songwriter tradition echo throughout their song catalogue, and their inimitable harmonies might well be the modern female counterpart of what The Everly Brothers accomplished in their seminal 1969 album “Roots”. Here is the difference: Klara and Johnana are not only talented singers with phrasing that will turn your heart around with their sudden stops, swoops, and soaring harmonies; they are also terrific songwriters.

Key tracks: “The Lion’s Roar”, “I Found A Way”, and the deep and dark “Dance To Another Tune”, which takes a surprising turn towards the end. The powerful closer “King of The World” is a nice rousing change of pace, with guest vocals from The Felice Brothers and former touring mate Conor Oberst.

The Lion’s Roar is one of the most beautiful records made in recent years. Don’t be surprised if it makes a dozen Top 10 Lists by the end of 2012.