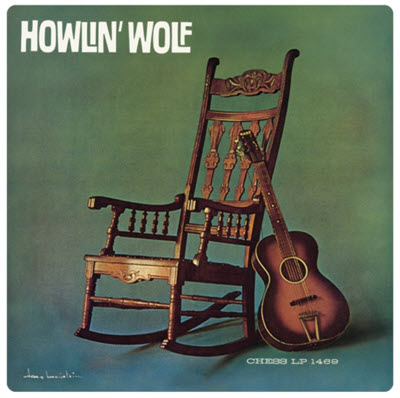 A scintillating album, one of the greatest blues records ever made.

When I heard Howlin’ Wolf, I said, ‘This is for me. This is where the soul of man never dies’.” – producer Sam Phillips

Voted the third best guitar album of all time by Mojo music magazine back in 2004, this classic compilation from Howlin’ Wolf is perhaps better known by Rockin’ Chair . Frankly, one could build a fine blues library consisting of little more than Howlin’ Wolf and the rest of the musicians that appear on this record. It’s that damned important.

Chester Arthur Burnett (nicknamed Howlin’ Wolf as a child by his uncle) began his music career in the 1930s as a devotee, student and imitator of the famed Charlie Patton, but evolved his own style quickly. In 1951 he recored several singles in Memphis at Sun Records under the tutelage of Sam Phillips. Phillips called him the most explosive, satisfying artist he ever recorded, and Phillips was not a man prone to exaggeration. He had, after all, also produced albums by Elvis Presley, Johnny Cash, Roy Orbison, Carl Perkins, Jerry Lee Lewis and many more. But Sam always recognized Wolf as something beyond extraordinary. As did The Rolling Stones, who slavishly imitated many of Wolf’s numbers, as did countless others including Lucinda Williams, who notably recorded “I Asked For Water, He Gave Me Gasoline”.

The Wolf always enjoyed financial success, always looked after his money, and always looked after his band members. The man oozed majesty and power on stage, and integrity off stage. Six foot three, approaching 300 pounds, and possessing a lightness on his feet (“I’m a hip shaker”, he sang in “Rockin’ Daddy”), the Wolf was an imposing presence. He was, however, anything but a one man show. A gifted harmonica player and a groove-laden guitarist, he was smart enough to give his band a wide berth in accompanying him. Hubert Sumlin, in particular, frequently played lead guitar lines simultaneously with the vocal, while bassist and songwriter Willie Dixon (along with bassist Buddy Guy!) teamed with up with various drummers (see list above) to generate some of the finest music ever recorded.

This album is a compilation disc, for the Wolf enjoyed several R & B singles hits in the mid ’50s to early ’60s. You’ll hear several different lineups from cut to cut, with the consistency of Sumlin on most tracks, and the writing of Dixon on many.

This is the real folk blues. Accept no substitutes. Oh, and you gotta buy this on vinyl.