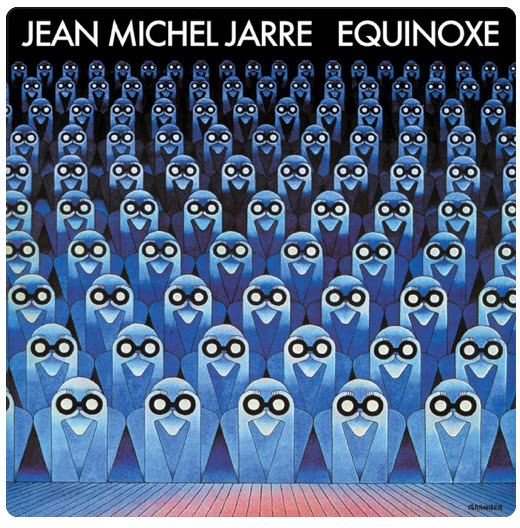 This year marks the 40th anniversary of Jean-Michel Jarre‘s 1978 album, Equinoxe, which was released as a follow-up to the phenomenally successful Oxygène. North American audiences may have forgotten the impact of this man’s music and his career to date, so it’s worth recounting a few startling facts about Jarre:

He is the most successful composer of electronic music ever, period. His live performances have on many occasions attracted audiences of well over a million (he holds several Guinness Book of Records awards for the size of the crowds attending his legendary outdoor performances). Jarre is closing in on record sales of 100 million. He is the largest-selling French artist in history, bar none. He has performed all over the world, notably in China and Russia. He was the first western performer to be invited to China. In 1997 he gave an outdoor concert in Moscow celebrating that city’s 850th anniversary – the audience numbered 3.5 million people. Take that, Rolling Stones!

Subjectively, it’s this reviewer’s opinion that his influence upon film music, popular music, and adventurous rock music (from people like Brian Eno, Rick Wakeman, Robert Fripp, Kraftwerk and Tangerine Dream) is nothing short of shocking. Jarre is destined to be known as the Johann Sebastian Bach of the 20th century. In fact, there are few other candidates for this job: Heitor Villa-Lobos, perhaps, or Ernesto Nazareth, or ??

Everyone from Pink Floyd to your average Hollywood composing hack has tried to copy Jarre’s work, so there are certain elements of his compositions that may sound overly familiar to you. However, it’s only when you listen to the records closely that you begin to appreciate the magnitude of his talent. His use of multiple synthesizers (often as many as fourteen on any given recording), his swirling melodies, and the imposing architecture of his orchestral approach: all of these are hallmarks of the Jarre sound, but there is something further. Arguably he is responsible for most of the truly beautiful orchestral electronica of the past few decades. His music has a warmth, a radiance and a compulsively listenable, pulsating melody that even detractors of electronica admit make his extensive catalogue undeniably persuasive.

“The excitement of being able to work on sounds in a tactile, manual, almost sensual way is what drew me to electronic music in the first place … The lack of limitations is very dangerous. It is like the difference for a painter of getting four tubes with four main colours or being in front of a computer with two million colours. You have to scan the two million colours and when you arrive to the last one you have obviously forgotten the first one. In the Eighties we became archivists and everything became rather cold as a result.”~ Jean-Michel Jarre

Jarre was born in 1948 to a female Holocaust survivor and to the noted French film composer Maurice Jarre, the latter of whom decamped for Hollywood. Maurice Jarre went on to considerable fame for his work with the film-maker David Lean, and as the composer for such films as Lawrence of Arabia and Ghost. His biggest hit was “Somewhere My Love”. He was a man of considerable talent and somewhat questionable personal character. Jean-Michel saw his father perhaps twenty times in his life, and the estrangement caused by his father’s embarrassing lack of interest in his son led to Jean-Michel’s turning away from the senior Jarre’s penchant for classical music. The younger Jarre discovered jazz and Ray Charles at a young age. He haunted jazz cafes in Paris and was fortunate to see luminaries such as John Coltrane, Archie Shepp and Chet Baker perform.

Then in the early 1970s he began working with the Moog synthesizer, which he later described as “the Stradivarius of electronic music”. Jean-Michel’s unique synthesis of jazz-based improvisation combined with the soul-baring intensity of Ray Charles’s vocals, and his own expansive interest in painting led to the compositions which became the 1976 hit album album Oxygène, recorded as a low-budget effort at his home studio, and which made him internationally famous.

After a slow start in Europe, that record reached number two in the U.S. album charts in 1977. The follow-up record was awaited with high expectations.

Equinoxe is every bit the equal of its predecessor, containing as it does extravagant melodies and multiple layers of distinct sounds derived from the many synthesizers used, as well as a virtuosic display of painterly effects of surpassing beauty. The recording lends itself well to spacey, filmic planetarium productions that are far less tiresome than Pink Floyd’s overused Dark Side of the Moon. What makes this recording significant is Jarre’s demonstration that he was no one-hit wonder, and that the well-known dangers of repeating one’s initial success were non-factors in his case; his capacity for lyrical invention seemingly knows no bounds.

Europe remains Jarre’s largest fanbase. Earlier this year, he gave a spectacular concert at Carthage during the 2013 edition of the musical festival of that city. Also in 2013, Jarre was elected as president of the Confédération internationale des sociétés d’auteurs et compositeurs (CISAC). He was the keynote speaker at the 2014 Midem Festival in Cannes. He remains a vital and influential force in the music world and should not be regarded as a relic from the 20th century: his impact and his talent remain a lasting and ongoing presence in the works of countless present-day musicians and performers.