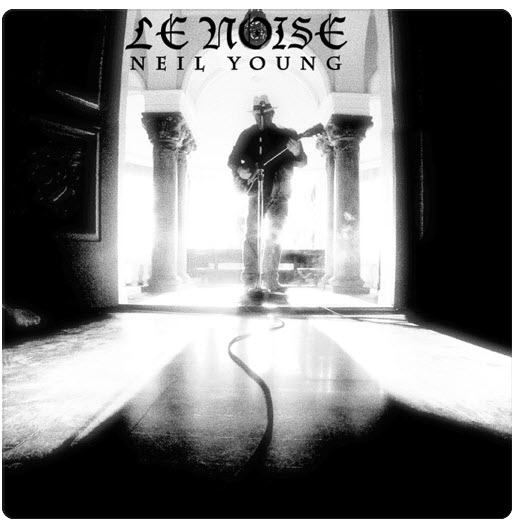 Daniel Lanois has produced landmark albums for the likes of Bob Dylan, U2, Brian Eno, Peter Gabriel, Emmylou Harris, and Chris Whitley. Now he’s turned his attention to Neil Young and put his own indelible stamp on Neil’s new album ‘Le Noise, creating a powerful atmosphere of unearthly power chords, echoes within echoes, as though administering electroshock to a guy who has already taken us pretty far offline in past works. Neil hasn’t sounded this alive in years.

Lanois notably said in an interview a couple of years ago “life is made of segments, conversations, and trickling streams, expected and unexpected. You turn a corner, see a friend, and continue down the road. And music should never stop representing that pace of life.”

Recently he also said about this new recording “we had taken the guitar to a new level. It’s hard to come up with a new sound at the back end of 50 years of rock n’ roll, but I think we did it.” When Neil was interviewed by the Chicago Tribune, he said the guitar sound that Lanois created “sounded like God”.

Lanois has brought his own sensibilities to this production, adding depth and texture to Neil’s sounds resulting in a record for the ages, showing just how far one man with one guitar can go. I don’t think any of these songs could be reproduced live on stage, but I’d love to see and hear Neil try. If he succeeded even fifty percent, he’d blow apart a few stadiums. Speaking of that, pay attention to your own speakers while you’re auditioning this work – turn it up too loud and you will probably be replacing them.

Le Noise is anything but noise. It’s a brilliant piece of work that is immediately attractive upon the first listening. If you’re a Neil Young fan, that is. Neil’s sentiments about relationships, politics, and love and loss are well-known, and this new record is lyrically consistent with what has gone before. And his voice remains the same. If you’re comfortable with what some have criticized as material better sung by others, your mind won’t be changed here. However, Neil’s voice suits his songs as perfectly as Dylan’s suits his. If you get it, and millions do, you’ll be very pleasantly surprised by this record.

Eight songs, thirty-seven minutes. Way too short. Standout tracks are the opening song ‘Walk With Me’, a reaffirmation of his love for those who have stuck with him, and ‘Love And War’, a confessional track backed by a great Spanish guitar that wouldn’t be out of place on one of Lanois’ own recordings. The lyrics for this song have stuck with me over several listenings: “I sang for justice and I hit a bad chord, but I still tried to sing about love and war”. Those words reminded me of something T. S. Eliot wrote many years ago. Eliot said “No one can sure of the permanent value of what he has written. He may have wasted his time and messed up his life for nothing”. Young’s lyrical frankness is refreshing as he admits he just may know nothing about anything but he still keeps on keeping on. He’ll be sixty-five years old this year, but he’s sounding like he’s twenty-five.

Young’s guitar playing is a revelation on many of the tracks, but particularly so on ‘Peaceful Valley Boulevard’, which is an electro-acoustic ballad. Then take a listen to ‘Someone’s Gonna Rescue You’, which features one of the greatest closes I’ve heard in years. He was obviously inspired by the instrument’s new electronics, created and perfected by Lanois over many years.

This is a record you won’t soon forget; it was made by two brilliant Canadians who have both forged new directions in music and have now come together to create something unlike anything else released this year. By comparison the 2010 releases by Arcade Fire and Band of Horses sound twenty years dated. It’s too early to tell which of these songs are destined to become classics, but the record itself is one of the highlights of Young’s many-layered career. I for one hope that he collaborates with Lanois again.