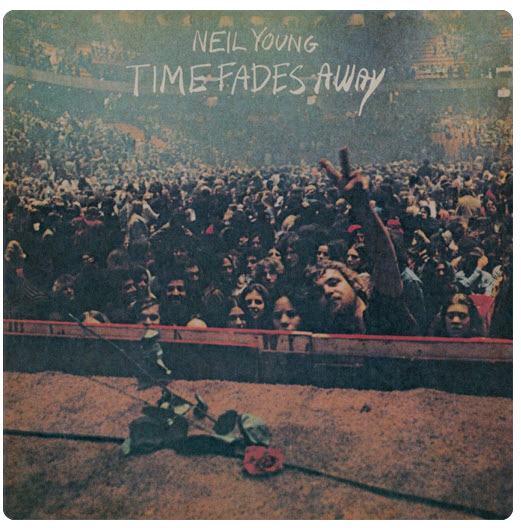 A gold album that is regarded as a flop and has been derided by its creator, Neil Young? Say it ain’t so, protest legions of fans clamouring for a reissue of Time Fades Away.

Neil Young’s first live album Time Fades Away hearkens back to 1973; it’s a wildly loose effort that is in sharp contradiction to its wildly successful and highly commercial predecessor Harvest. It’s not surprising that the album went gold quickly but what continues to be shocking about this record is that it was limited to one pressing. The record is now generally unavailable unless you scour the used vinyl shops. A digital version? – forget it, although fans have been petitioning Young for years to salvage the murky sound mix and reissue it on CD or digital download.

However, there’s also something to be said about projects from a major artist that don’t make the grade. In the case of Time Fades Away, it was about Young’s refusal to be a prisoner of fame and fortune. And, it must be emphasized, the album is also about “thirteen junkies too weak to work” – the opening lines of the title song. Hell no, Young was relaying to his audience, you want to hear the hits, they’re on my records. You want to hear what I’m up to, then listen to this.

Consider as well that this is the album that saw Young fire his lead guitarist, and close friend, Danny Whitten only a few days into the tour preparations. Whitten then killed himself with a drug overdose, and whether it was accidental or suicidal, Young was overcome with two emotions as he set out on the tour: guilt and rage. He was drinking tequila heavily at the time, and was regarded by all and sundry as withdrawn, hostile and overcome with grief. He insisted on singing mostly in falsetto throughout the tour. Confusion ran high throughout the band. Noted drummer Kenny Buttrey quit the tour and Johnny Barbata, who had played with CSNY, is the one heard on all of the recordings.

The group was calling itself The Stray Gators and they were receiving a chilly response night after night, so much so that Young called in David Crosby and Graham Nash to help out with several of the concerts on the tour. Ninety days in Young called it quits. The tour, he said, had been a big mistake.

A mistake? – hardly, but Young had further compounded the unsettling experience by insisting on recording the album live to 16 track using the new and highly questionable Quad-8 CompuMix, the first digital mixing soundboard. CompuMix was not so fondly referred to by all concerned as CompuFuck, so unsatisfying were the results derived. This may have been where Neil first developed his well-known aversion to digital sound. Time Fades Away is a notable plunge into muddy waters, so much so that the sound quality was despised upon the album’s initial release. These days it’s being praised for its gritty realism and a commitment to naturalism.

Neil is said to dislike both the memories of the tour and the sound of the album intensely, though the intent and the content remain close to his heart. Here’s what he has had to say over the years about Time Fades Away.

“It was recorded on my biggest tour ever, 65 shows in 90 days. Money hassles among everyone concerned ruined this tour and record for me but I released it anyway so you folks could see what could happen if you lose it for a while. I was becoming more interested in an audio verite approach than satisfying the public demands for a repetition of Harvest.

Time Fades Away was the worst record I ever made – but as a documentary of what was happening to me, it was a great record. I was onstage and I was playing all these songs that nobody had heard before, recording them, and I didn’t have the right band. It was just an uncomfortable tour. I felt like a product, and I had this band of all-star musicians that couldn’t even look at each other.”

Young has rarely played songs from Time Fades Away live, but in July 2008 performed the record’s title track at a concert in Oberhausen, Germany.

Key tracks on the record: the title track, as well as ‘Journey Through The Past’, with its heartbreaking melody and Young’s willingness to lay bare his romantic troubles and ‘L.A.’, with its familiar electric guitar vibe and searing putdown lyric that echoes the sentiments of ‘Everybody Knows This Is Nowhere’. Especially memorable as well is ‘Don’t Be Denied’, the tribute to his childhood and what music meant to him while growing up.

It’s worth noting that this album was named by R.E.M. as their prime source and inspiration for their album New Adventures in Hi-Fi.