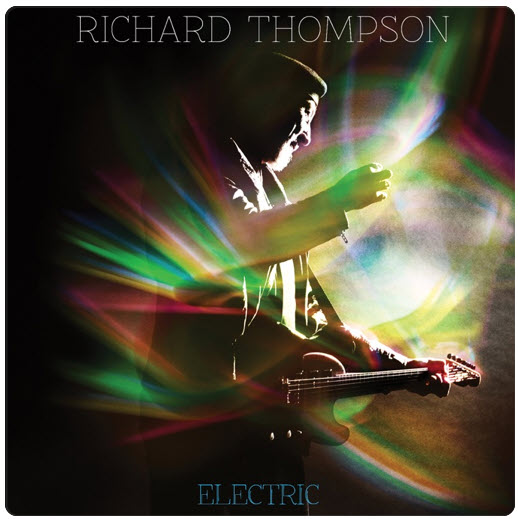 One prodigiously talented songwriter, guitarist, and performer is the highly underrated Richard Thompson. In fact, he could captivate audiences with a different set list every night of the week, and whether he chooses to play solo, as lead of a trio, or with a full backing band you would more than get your money’s worth. Last night at the Rio Theatre in Vancouver, BC, the legend known simply as RT to his fans flourished in the power trio format, with Michael Jerome on drums and Taras Prodaniuk on bass.

This group he calls The Richard Thompson Electric Trio is out on tour promoting the new album Electric (produced by Buddy Miller), and it’s far and away the strongest performing format of his illustrious career. I’ve seen him as a solo performer several times over the years, and been amazed at his songs and his impressive mastery of the fretboard. And I’ve seen him with backing bands who were simply that. However, this trio is incredibly dynamic from beginning to end. Jaw-dropping, as a matter of fact, in the way they bring both his new material and his old standards to passionate, electrified life.

Dressed in black, looking fit and trim and wearing his trademark angle cap, the 64 year old Thompson opened up the set with a couple of blazing numbers from his new album, which is being hailed in many circles as his finest since Mock Tudor back in 1999. “Sally B” was the stronger, with its deadpan lyric “Who needs books when you’ve got them looks, Sally B?”. Immediately impressive was the powerful, intelligent and fluid drumming of Michael Jerome, and the complex interplay Jerome displayed with the equally talented Prodaniuk. It was apparent that the concert was going to be much more than RT and his songs (as satisfying as that is), and that this Electric Trio was precisely that, a trio with dynamics, with connection, and with an unreserved joy in playing the diversity of RT’s material. Controlled fury, alternated with exquisite tenderness, humour, and depth of feeling characterized the catalogue put forth last evening.

RT remarked about the next number “Salford Sunday”, ‘it’s a depressing song, but they all are, aren’t they? This one is particularly depressing as it’s about the industrial towns of England, which were important to me.” I suppose for some people Richard Thompson is known for the darker side, but there’s something exhilarating and cathartic about every one of his songs, particularly when performed with such dynamic arrangements.

The entire performance was an outstanding mix of craftsmanship and showmanship. The relatively stoic Thompson confined his movements to exchanging guitars several times, but in spite of a fairly stationary appearance his fingers blazed throughout and his voice rang true, even displaying a surprising falsetto on a few occasions. He has the speed of any 21 year old guitar hero, but with the tone and the dynamics of a master. Listen to Thompson for even one solo and you’ll have deduced where Mark Knopfler of Dire Straits stole all of his bag of tricks (and I mean all). If Thompson has not had near the acclaim that Knopfler had, well, put that down to marketing and the requisite desire for fame, which I don’t think was ever that important to RT. The work, the songwriting, the mastery of the instrument, combined with RT’s well-known reserve and pursuits into spiritual matters: that has been his chosen path. What has changed for him recently, and I think it’s a big change, is the addition of this band. They deserve a few further thoughts:

Notably, Jerome rarely looked at his kit when playing, engaging either with his bassist, with RT, or with the audience. He’s a drumming wizard, an absolute powerhouse who never dominated the material, but always drove it, always supported Thompson and the song. And Prodaniuk displayed on several numbers a feather-light, inventive and wholly satisfying intensity on bass, particularly with the remarkable solo he added to “Shoot Out The Lights”, in which Thompson further demonstrated his guitar prowess with a breaking-glass, discordant overlay that made this one of the highlights of the night.

There were many standouts from the Vancouver concert, but I’ll mention just a few. The new track from Electric, called “Good Things Happen To Bad People” is immediately memorable, and the strength of this song along should push Electric up the charts. Great melody, hooks galore, and one terrific lyric that demonstrates Thompson is flat out our most intelligent songwriter working today. And by intelligent, I’m not talking book smarts, though he displays that as well. This song does everything a rock/pop song should do – it’s compelling, finely crafted, and doesn’t give up everything the first time or even the first 100 times you listen to it.

The closing encores left nothing to chance: a blistering take on the Hendrix recording of “Hey Joe” was every bit as exciting and authoritative as Jimi’s version; “Stony Ground”, the opener from the new album, was a dazzling rocker, and the final tune “Tear-Stained Letter” was a juiced-up, danceable boisterously sad rendition of that classic from the album “Hand of Kindness”. Danceable and sad? – yes, only Richard Thompson is capable of that.