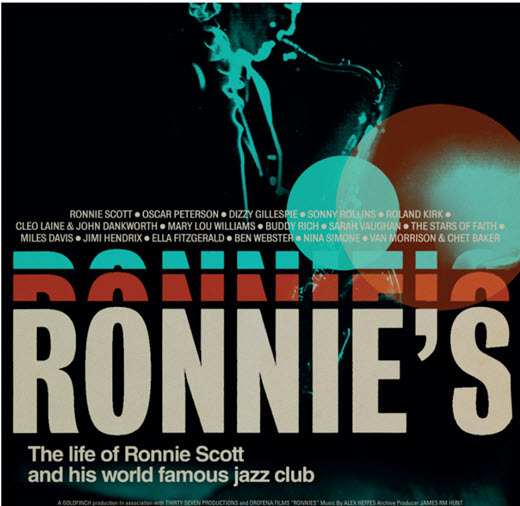 Available to view at the Victoria Film Festival’s online edition, from Feb 5th to 14th. Virtual passes are available to purchase here.

Note: available to view for residents of British Columbia

Anyone watching PIXAR*Disney’s Soul will not get a full lesson in what Jazz music means. It’s a film about how to live your life to the fullest. After viewing Ronnie’s, a documentary about Ronnie Scott and the Jazz club he founded with Paul King, the lesson about expressing that inner being is the equivalent of that next course needed in an ongoing study. To learn about the history and evolution of the sound is one thing, but to understand the emotional context of what makes Jazz special also includes getting to know the personalities who play it. This work nails this importance, and a whole lot more.

The documentary by Oliver Murray succeeds at revealing the man, the hard times he faced – especially his depression and gambling problem–and what music represented not only to him back in the ’50s, but also to the masses back then. In this work, it was said (paraphrased), “The landscape of Jazz in the mid-50s was extremely diverse. Bebop was a new development that started in America. It was a reaction against the commercialization.”

The Jazz scene in the United Kingdom was its own world. A barrier existed and this documentary earns its mark by revealing how the business worked back then. Without behind the scenes work and influence, this documentary posits the British Invasion may not have happened. One key point mentioned is that an exchange of talents from both sides of the Atlantic helped earn many groups international fame.

This Jazz club became the heart and soul of the London scene over the years. To witness its splendor in its heydays through archival footage to the present is a fine way to make anyone feel like they’ve been there at least once. But to go there for real is an experience in itself! The stories of not only Scott (through past interviews), his daughter, King’s wife but also greats like Quincy Jones make this work shine. To name a few, we see artists like Jimi Hendrix, Ella Fitzgerald, and Buddy Rich perform. Only snippets are offered. When considering how long this operation has been in business, since ’59, to feature everyone would be tough. We have a trip through memory lane and this film is very much a love letter to the man and this club’s continued legacy.