Many people including me would agree that Elvis Presley is, was and always will be The King Of Rock & Roll. Perhaps no one has had such a massive and everlasting impact on the genre of Rock & Roll music and popular culture than Elvis; his image was eventually put on a U.S. postal stamp. I think that it would be pretty tough to find anyone who would dispute this or try to dethrone the reputation of The King. However, a couple of guys do come to mind: Little Richard and a certain Mr. Jerry Lee Lewis. Like Presley, these guys were there from the beginning, the very birth of that early form of music that was soon to become Rock & Roll. And like The King, they helped to set the world on fire with not only their music, but their performances as well.

Now, Jerry Lee didn‘t seem to dislike Elvis personally, I just get the feeling that he truly believed he was better than Presley when it came to pure talent. Lewis has often been quoted as stating that he is, in fact, “the REAL King of Rock & Roll” because of his “God-given talent” and one could hardly argue the fact that “The Killer” is damned good. He even managed to have his likeness end up on a postage stamp as well! Little Richard too, has been quoted numerous times as stating that he is “the real King of Rock & Roll”… also citing God as the reason for this and has even openly criticizing Presley as being a copycat. Richard and Lewis have a lot in common as far as careers go as well: they both play a mean piano that is heavily steeped in the southern “Barrelhouse Blues” tradition, walk that fine line between God-fearing churchgoer and rock and roll sinner, and both rely heavily on their onstage antics and wild costumes to propel their performances further. Little Richard even covered Lewis‘s “Whole Lotta Shakin‘ Goin‘ On” in 1965! I must agree with the fact that both of these artists are world-class performers who not only helped to forge popular music into what it is today, but played pivotal rolls in changing the perception between what a musician is and what an entertainer should be: showmanship, showmanship, showmanship. That‘s what it‘s all about.

Combine charisma with musical genius and you get someone destined to become a star. On the flipside of the coin, there comes along every once in awhile an artist who is all of these things: gifted musician, huge talent, professional performer, superstar and pioneer, who for whatever reason, seems content to do what they do best without having to label themselves at all, much less as “The King” of anything. And, once again, two names come to mind: “Big Joe” Turner and “Big Joe” Williams. Now, these two “Big Joe‘s” really could be referred to as The Architects of Rock & Roll

Joe Turner, or “The Kansas City Shouter”, as he is sometimes called, was born in Kansas City, Missouri in 1911 and began singing Gospel in church choirs as a child. By his teens he was working as a bartender and became known as the “singing barman.” He was soon performing alongside such greats as Pete Johnson, Albert Ammons, Meade Lux Lewis, Billie Holiday and Duke Ellington. Big Joe‘s sound could best be described as a jazzy Jump Blues/Rhythm and Blues mix that was perfectly suited to this 6‘3”, 320 pound man‘s booming voice. By the early ’50s, Turner was a polished, crowd-pleasing showman who captured the attention of Ahmet Ertegun at Atlantic records and a decidedly more Rock & Roll -sounding Big Joe exploded onto the popular music scene. It was during this time that songs such as “Shake, Rattle and Roll” (not long after covered by Bill Haley and his Comets), “Sweet Sixteen”, “Corrine, Corrina”, and “Flip, Flop & Fly” (some of which was borrowed by Jerry Lee Lewis) were released and Turner was instantly the biggest thing on jukeboxes and radios… a full-fledged rock star!

The thing that makes Turner‘s music such a solid building block of early Rock & Roll is not only the contents of the lyric, but its overall feeling as well. Throughout the late 1940s and into the ’50s Big Joe‘s recordings all contain that same general “good times” feel and quality that soon went hand-in-hand with teenagers, cars, girls and malt shops. 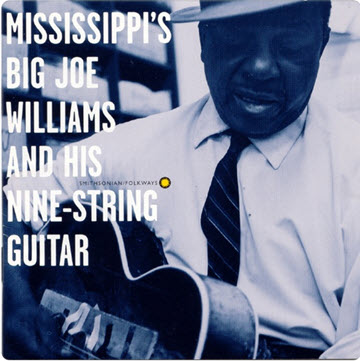 Similarly, “Big Joe” Williams (also called Po‘ Joe Williams) could also be viewed as a builder of the early Rock & Roll sound, but for slightly different reasons. He was born in Crawford, Mississippi in 1903 and spent the majority of his younger days wandering the south playing Country Blues on street corners, juke joints and work camps until getting steady work with The Rabbit Foot Minstrels in the ’20s. It was through these gigs that Joe perfected his act, combining his talents with his ability to entertain and engage an audience. He met Lester Melrose of Bluebird Records in 1934 and soon began recording, producing such classics as “Crawlin‘ King Snake” and “ Somebody Been Borrowin‘ That Stuff”. But it was 1935‘s “Baby Please Don‘t Go” that would forever change the face of music and set the stage for rock‘s birth some 15 plus years later. It‘s not only the re-recording of Williams‘ songs by so many artists such as Van Morrison, The Doors, The Animals, AC/DC and Tom Petty that‘s important, it‘s what rests within the tunes themselves. For this “Big Joe”, the guitar is the defining foundation of his songs.

Williams played electric guitar long before most and used, to his advantage, a sound born of his own unique creation: a 9-string guitar. Joe would play rollicking rhythms and chords with the standard six strings but accompany himself on the other three as a bass-line. If one listens carefully to the guitar work in Big Joe‘s “Wild Cow Blues”, “Someday Baby”, “I‘m Getting‘ Wild About Her”, and “Meet Me In The Bottom”, the groundwork of almost all early rock guitar phrasing is very apparent. It practically jumps out and hits you in the head! And, as with Turner, the overall Rock & Roll feeling is here – a rebellious, carefree attitude that personifies the rocker lifestyle and ideology.

I think we owe a lot to these two innovators who are often overlooked for their contributions to rock not only because of their obscurity, but because they often remain in the shadows of those who went on to become mainstream rock stars: Elvis Presley, Carl Perkins, Chuck Berry and The Beatles. The least we can do is to acknowledge the importance of what their music did to help develop modern Rock & Roll and adorn these early pioneers with an appropriate title… I vote for “Architects of Rock & Roll.”