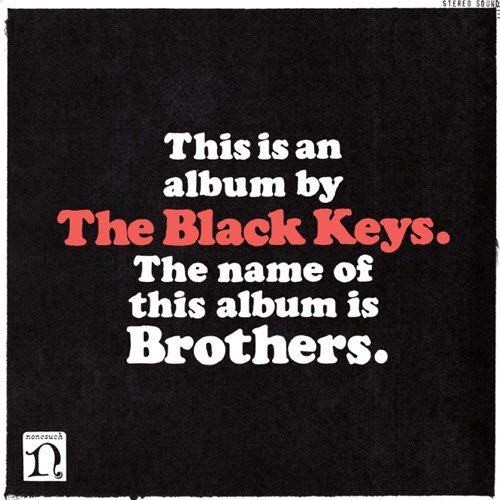 This year is starting off strong, with the much anticipated release of the remastered classic from The Black Keys. It arrived on various streaming services today, and we had a chance to audition it. The results, sonically, are superb. We sat through the listening session as enthralled as when we first encountered the album 10 years ago. Below is our original review from the first days of Vivascene back in 2010 when we pronounced it “Album of the Year”.

Brothers was recorded at the legendary Muscle Shoals analog studio in Alabama over ten days in August of 2009. It’s been said that the building shakes when you play in it. Well, before you put on this record at home, you’d better check your own foundation and walls because this album shakes and rocks from beginning to end.

In fact, Brothers makes for compulsive listening for rock and blues fans who thought music like this wasn’t being made any more. It’s thick, hard-driving, relentless and highly addicting. Clocking in at over an hour, with 15 cuts that are highly individualized, stylized, and loose at at the same time, the album is one of the most exciting events in recent music history. Best band working today? – probably so. Carney and Auerbach have been playing together since they were sixteen years old, and they have concocted a fuzzy, gritty and original sound that distinguishes them from every other group out there.

The opening tune ‘Everlasting Light’ sounds like it could have been written forty years ago, and also as though it might have been recorded two or three years from now. A hypnotic falsetto vocal by Dan Auerbach overlays the dirty blues bass-less track that begs you to turn it up. The first single from this record was ‘Tighten Up’, and it was produced by the ubiquitous Danger Mouse who helmed the previous The Black Keys release Attack and Release.

Additional hot tracks here are the soon-to-be classic ‘Next Girl’ and the truly astonishing cover of the old Jerry Butler soul standard ‘Never Gonna Give You Up’. Every track is worth adding to your collection, though – and I mean every track. Other reviewers have noted the album is too long for them, but I find it’s in heavy rotation these days on my equipment, and I don’t skip any of the tracks. Too much is just enough in this case.

The hallmark of The Black Keys is their passionate intensity. In an age when so much music is formulaic and/or boring, these guys are anything but. Brothers is a record that will be listened to for years to come – it’s the album that should guarantee the group a much wider audience. People who have quit buying music for years are going to buy this album. Their current tour for the fall of 2010 is sold out at every stop.

Often compared to The White Stripes, if only for the drums/guitar duo’s configuration, The Black Keys stand entirely on their own as a major force. They’ve stated a preference not to be slotted into the blues category, though their influences range from Elmore James to Junior Kimbrough. Though I hear several ’60s and ’70s hard core rock groups in their sound, there’s never been quite the synthesis of nasty blues music supported by soulful vocals as in this album. This is their sixth full-length release , but there is undoubtedly more great music to come in future releases. And the crop of videos they’ve produced for Brothers is a harvest of plenty, even if Auerbach is said to despite the video for ‘Next Girl’.

They are outstanding live performers – their concert video from a 2008 Portland gig entitled Live At The Crystal Ballroom showcases their ability to electrify their audience, despite having only two of them on stage. Like the power trio Cream, and their present-day rival on the music scene The White Stripes, these two prove once again that less is more.