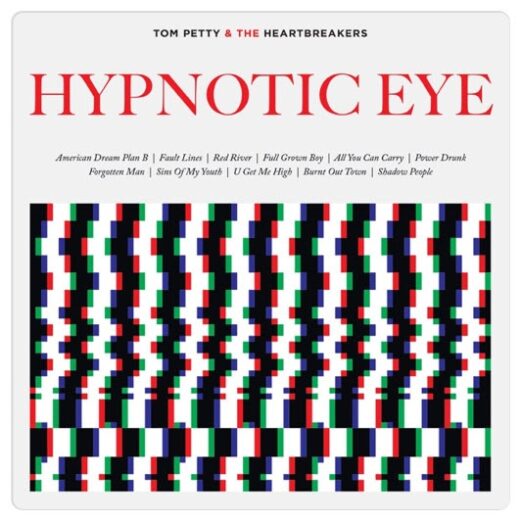 Tom Petty & The Heartbreakers find the fire in their bellies once again with Hypnotic Eye, a strong contender for rock album of the year.

The best rock band in the business is finally and unexpectedly back on track with their new album Hypnotic Eye, and it is deservedly the top-selling album in the country right now. Yes, Tom Petty & The Heartbreakers have got their mojo back, and for all the hype that surrounded their previous record Mojo, back in 2010, this one is as strong and as vigorous as anything they’ve done in a couple of decades.

It’s as though they suddenly recalled the reckless abandon that thrilled us back when the airwaves were filled with Donna Summer and Barry Manilow; their lean, tough rock tunes blasted those pop pufferies to smithereens with tunes like ‘American Girl’ and ‘Refugee’. When they’re on, there is no band in America to match the rhythmic talents of keys player Benmont Tench, guitarist Mike Campbell, drummer Stan Lynch and bassist Ron Blair. Combine that with the songwriting and vocal ability of Petty himself, and you have one of the most visceral and dynamic recording and performing bands around.

Their competition? – Springsteen, perhaps, though his output is staggeringly uneven. He has returned to form lately, though not at the level of Hypnotic Eye. And, years ago, there was Bob Seger and the Silver Bullet Band, who these days have apparently run out of ammunition. As for that vaunted group The National, with their insular sound and mumbled ramblings, this record should teach them a few tricks if they’re willing to listen. Hypnotic Eye is indeed hypnotic, whereas the last few outings from The National serve only to put the listener to sleep.

Petty and Campbell are more than musicians; they’re formidable arrangers and producers, ably assisted by long time studio collaborator Ryan Ulyate. The resulting sound is sharp and immediately memorable, with a limited (and powerful) instrumental palette subtly enhanced by Pro Tools. Still, the album sounds as though it could be performed note for note live – that’s a noteworthy exception in this era of over-produced sonic mush.

Standout tracks: ‘U Get Me High’, the haunting ‘Sins of My Youth’, ‘Burnt Out Town’ (this is the sound Dylan is aiming for, and just can’t manage to find – he should hire The Heartbreakers or better, still, cease recording), and the gorgeous closer ‘Shadow People’. Anyone who can write these lines is someone still in the reckoning for best rock lyricist around: “Well I ain’t on the left, I ain’t on the right, I ain’t even sure I got a dog in this fight”. At close to seven minutes, the tune feels half that length, so tight is the interplay between Campbell’s guitar work and Tench’s tasty keyboard fills. And speaking of Campbell, his work on ‘All You Can Carry’ is as nasty, brutish and compelling as that from any garage band you care to name.

Hypnotic Eye displays guitar power chords straight out of the Heartbreakers’ past, and a vocal brilliance Petty has somehow rediscovered. It’s not only one of the best records released in 2014, it’s also a happy case of being the first career #1 album for the group. Sometimes the audience gets it right. It’s been a long time coming for the band, and it’s an inspiring achievement for a group that’s been around for 35+ years.