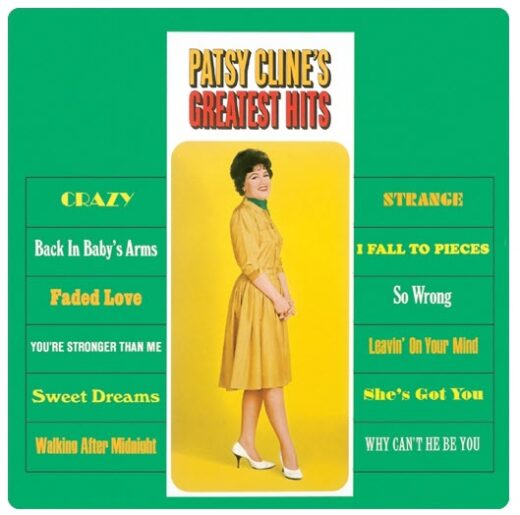 1. “Gone” by Ferlin Husky. This 1957 single went to number one on the country charts and to number four on the pop charts. Ferlin Husky had recorded this Smiley Burnette tune under the name of Terry Preston more than 5 years earlier without success. A new approach with sparse instrumentation, backup vocals by the Jordanaires, and Husky’s powerful voice up front did the trick. This country weeper is regarded as the first recording of the new Nashville sound. (B)

2. “Invitation to the Blues” by Emmylou Harris and Rodney Crowell. The duet by Harris and Crowell on Ray Price’s “Invitation to the Blues” is splendidly enhanced by the swinging fiddle of Larry Franklin and the effortless steel guitar by Paul Franklin. A strong Crowell lead vocal with superb vocal harmony from Emmylou goes hand in hand with the brilliant instrumentation to make this one of the best songs on the Yellow Moon album. I never thought I would hear a better version than the remake by Chris Hillman and Herb Pederson, but… here it is. (R)

3. “From A Jack To A King” by Ned Miller. Contemporary audiences probably know this song best from the 1988 version by Ricky Van Shelton, but the definitive version (and there have been countless covers) belongs to the man who wrote it, Henry Ned Miller. The song bombed in 1957, but Ned pushed for a re-release in 1962 and it was an immediate hit on both the pop and country charts. Ned was primarily a songwriter and was so shy about performing that he paid others to impersonate him on tour. His voice wasn’t much more than a warble, but it was a marvelous, moving sensation. Jim Reeves and Elvis Presley also did covers – Elvis on his From Memphis to Vegas/From Vegas to Memphis live album. (B & R)

4. “Fast as You” by Dwight Yoakam. Originally judged as too rock for country stations, and too country for rock stations, Dwight hit his stride in the late ’80s and early ’90s with singles such as this. He proved himself to be a first-rate songwriter with a penchant for hooks and witty lyrics. The great Al Perkins (dobro, lap steel, and pedal steel) and Dean Parks (acoustic guitar) make some major contributions to the record’s lasting appeal. If you like the Bakersfield sound, check out all of his mid-career albums, particularly Hillbilly Deluxe and This Time. (B and R)

5. “Tennessee Whiskey” by Chris Stapleton. Five years on, Stapleton’s version of this David Allan Coe tune has been certified 6 times platinum. Whether it’s the R&B infused vocal, or the compelling impact of his laconic live performances, Chris Stapleton hit paydirt with this single back in 2015. It’s one of those tunes you’ll be hearing for years to come. (B)

6. “Hello Walls” by Faron Young. Penned by Willie Nelson in his early days as a Nashville songwriter, Faron Young recorded it first in 1961 and in our opinion his version remains unequalled in its intensity. This is another example of great country music crossing over to the pop charts. Faron never had another pop hit, and countless country, pop and even jazz (Esther Phillips) artists had a go at this classic. Faron rules. (B)

7. “Today I Started Loving You Again” by Merle Haggard and The Strangers. A worthy candidate for the greatest song ever about lost love. The story goes that Merle and his songwriter wife had a falling out one day; she left their trailer to buy a pack of smokes. By the time she returned, Merle had written most of this number. They finished it together. The song was issued in 1968 as a “B” side to the now forgotten “The Legend of Bonnie and Clyde”. Though on its own this heartbreaker failed to chart, it has since been recorded by dozens of artists. (B)

8. “She’s Got You” by Patsy Cline. Another classic song written by the great Hank Cochran, sung by the greatest country singer ever. Patsy is supported by producer Owen Bradley with The Jordanaires on backup vocals, Floyd Cramer on piano, Harold Bradly on 6-string bass, Buddy Harman on drums, Grady Martin on electric guitar and more. This is a heartbreak song with a jazz upbeat, a lethal combination. (B)

9. “Let Your Love Flow” by The Bellamy Brothers. The opening guitar notes of this 1976 tune are not just memorable, they are country’s equivalent of the opening Fadd9 chord of The Beatles’ “Hard Day’s Night”. Stops you in your tracks. The tune became a none-stop one-hit wonder for a couple of studio musicians, David and Howard Bellamy. Neil Diamond passed on this song. So did Johnny Rivers. Mistakes were made, to the eternal satisfaction of the Bellamys, who built an entire career around it. (B)

10. “You’re Only Lonely ” by J.D. Souther. The title track from J.D. Souther’s 3rd solo album became one of his biggest hits, hitting #1 for five weeks.  I’ve read that J.D. was as big fan of Roy Orbison, and that the song was inspired by this love for Orbison and particularly his song “Only The Lonely.”  In a 2017 interview Souther related: “That song had actually been sitting around for awhile; I wrote that in Colorado about six years before, when we were rehearsing the Souther-Hillman-Furay Band. It was up in my little cabin that I rented from Stephen Stills. I was snowed in, and I just wrote it about somebody…it’s obviously written for a girl. I didn’t think it was finished at the time. And then six years later,  Waddy Wachtel (guitarist/producer) and I were sort of planning what would eventually be called the You’re Only Lonely album. Waddy asked, “Don’t you have anything that sounds more like an uptempo single?  I said, “Well, to be honest, no.  But, come to think of it, I’ve got this little song that I wrote a few years ago in Colorado but I just never thought it was finished…I’ll play it for you.” So I played it for him and said, “You see, it doesn’t really have a chorus, and it doesn’t have a bridge.” And Waddy just said, “Sing the first verse again.” I said, “Oh, okay; and it just sounded so catchy and sincere.” (R)

11. “Killing the Blues” by Robert Plant and Alison Krauss The brilliant album of duets entitled Raising Sand yielded this understated gem. Who knew that Robert Plant was capable of such tenderness? This song can get under your skin like no other. I first heard it on an album of covers by Shawn Colvin some 30 years ago and was absolutely mesmerized. Here’s what Alison Krauss had to say about the song: “When you combine a melody that lifts you up with a lyric like that, it’s a twisted thing. When you get that combination that is really something.” (B)

12. “Luckenbach, Texas (Back to the Basics of Love)” by Waylon Jennings. 1977 was a big year for Waylon Jennings. This single went to number 1 and the album it came from, Ol’ Waylon, sold widely to country and pop fans alike. Outlaw country was just as popular as Saturday Night Fever, although both smacked strongly of something manufactured. “I knew it was a hit song, even though I didn’t like it, and still don’t”, Waylon confessed in his autobiography. Still, Waylon’s powerhouse of a voice suddenly got all the appreciation he deserved. (B)

13. “Cool Water” by Marty Robbins. The song was written by Bob Nolan, who headed up The Sons of the Pioneers, famous for working with Roy Rogers. Nolan was a gifted songwriter, composing and recording dozens of authentic-sounding cowboy songs. Vaughn Monroe had the first hit version of the song “Cool Water” along with the Sons of the Pioneers in 1948.   Among the countless covers is this one by Marty Robbins, featured on his 1959 album Gunfighter Ballads and Trail Songs. This was perhaps the first real concept album. Marty’s version is beautifully restrained, and matched perhaps only by the much later cover duet of Joni Mitchell and Willie Nelson. (B & R)

14. “Honky Tonk Blues” by Hank Williams. Recorded in four different attempts over four years and never released until the fourth in 1951, the hit version showcased a brilliant vocal from Hank, backed by a stellar band that included Don Helms on steel guitar and Jerry Rivers on fiddle. Country boy goes to the city, learns a lesson or two, but did he ever make it back home? The song suggests otherwise. (B)

15. “I Gotta Know” by Wanda Jackson. The Queen of Rockabilly in a start-and-stop number that still smokes after all these years. Wanda could sing clear near everything. Elvis told her so. Dylan pronounced her “a firecracker”. Jack White produced her latest. What more do you need to know? (B)

16. “Sea of Heartbreak” by Rosanne Cash and Bruce Springsteen. The most recent and best cover of this tune was the lead single from Rosanne’s great album of covers The List. Although a big hit for country music’s greatest poet of despair, Don Gibson, it’s surprising he wasn’t the author. Rosanne and Bruce evoke all the sadness of lost, unforgettable love. (B)

17. “Islands in the Stream” by Kenny Rogers and Dolly Parton. CMT named this the best country duet ever back in 2005. Yet it wasn’t written as a country song. Penned by the Bee Gees, intended for Marvin Gaye as an R & B number, Barry Gibb co-produced this catchy tune. It resurrected the careers of both Kenny and Dolly. The very definition of “earworm” in our view. A U.S. radio station once played it continuously for several days straight. (B)

18. “Wichita Lineman” by Glen Campbell. A song that could survive any reading, even the tortured one delivered by Isaac Hayes on his 1968 Hot Buttered Soul album, or the original writer’s later solo take on several of his best songs . Glen Campbell’s version of “Lineman” tops them all. The purity of Glen’s voice, the splendid backup of The Wrecking Crew, and the believability of the character Campbell creates – all are testament to one of our greatest songwriters, Jimmy Webb. (B)

19. “Long Gone Lonesome Blues” by Sheryl Crow. Recorded for the Timeless tribute album of Hank William tunes, Sheryl proves herself surprisingly adept with country music. It’s the real standout on this album that contains many great contemporary artists such as Dylan, Ryan Adams, Keb Mo’ and more. Crow did receive a  Grammy nomination in 2002 for Best Female Country Vocal Performance for “Long Gone Lonesome Blues.”  Sheryl moved to Nashville in 2006 and released a “full-on” country music album in 2013 with Feels Like Home. (B & R)