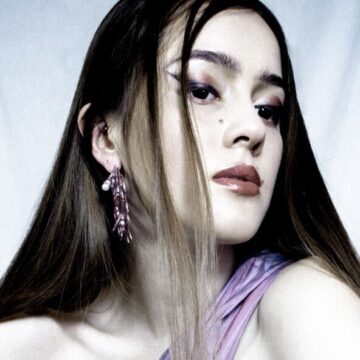 Announced today, They’ll Collect Us at Dawn is a collaborative project/EP from London production duo BON and audio-visual artist Akiko Haruna. BON’s sound is rooted in the desire to support The Other, exploring a space in counterculture and how it morphs from one scene to another. Haruna presents sonic narratives through a platter of textures, melodies, and organised chaos. Her sound is born from a desire to transform intangible meaning into rich, 3D, acoustic environments.

They’ve come together to create a project that soundtracks future soundscapes and scenarios in both Sci- Fi Utopias and Dystopias. Using analogue equipment and live instruments, they’ve crafted 3 tracks of retro futurism, the first of which is out today.

“The concept behind this track was built from the foundations of the rest of the EP: AI’s falling in love.  ‘First Sight’ represents a sentient mind on the cusp of discovery. A gentle rush of euphoria upon experiencing connection for the first time. It is a definitive event. The unfolding of a new perspective with endless possibilities. Like an aural renascence of a universal fundamental or a feeling of enlightenment that then settles into calm and comfort.” BON + Akiko Haruna

BON is a production, composition, writing, and art partnership of Yerosha Windrich and Alex Morris. Created as an ode to nature, the pair released visual album ‘Pantheon’ this time last year. They have contributed to projects on Warp Records, Hyperdud and 4AD as well as having releases with Alxndr London and Dadras (Uno NYC). Their own label Spatial Awareness has released previous collaborations with Mykki Blanco as well as their own mixtape project 33:33.

Brighton’s Akiko Haruna is a sound designer and audiovisual artist, constructing experimental sound and vision for the moving image. Over the past few years, she’s shaped a background in experimental choreography and audiovisual art into a holistic practice. In the lineage of SOPHIE and PC Music, production, composition, vocal performance and movement form the basis of Haruna’s exploratory club pop. Her ‘Be Little Me’ EP was released last November on Numbers.