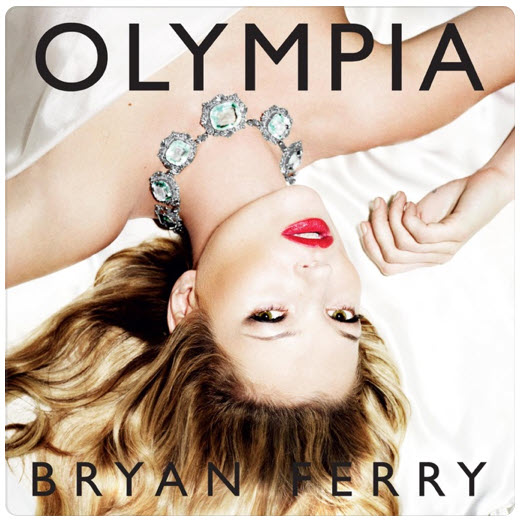 Bryan Ferry’s new album Olympia is in many ways the logical successor to Avalon, widely admired and imitated by other artists but never duplicated in its layered sensuality and exploration of real-life adult romance. With Brian Eno and Phil Manzanera from Roxy Music as contributors, this new release was anticipated by many as a Roxy Music reunion. It may, in fact, be better than that. It’s an intriguing mix of the past and the present in music, done up by one of the sexiest guys who ever lived, who still retains his charisma at the very advanced age of 65, and about whom it was famously said “ Bryan Ferry is more likely to redecorate a hotel room than trash it”. Peter York once said “Bryan Ferry should be hanging in the Tate Gallery”. He has a 28 year old girlfriend named Amanda Shepherd, keeping up with his long tradition of attracting single young sirens. Raised in a working class family in England, he has always been and always will be, in his own words “an orchid born on a coal tip”.

Bryan’s last album was Dylanesque, a 2007 effort that failed in a spectacular fashion, despite his wonderful covers of some of Dylan’s best tunes. Bryan’s last public relations event, of that same year, was a notable disaster in that it disproved the notorious axiom that “there’s no such thing as bad publicity”. He made some rather unfortunate remarks about the beauty of Albert Speer’s Nazi-era architecture, and admired the genius of the Nazi filmmaker Leni Riefenstehl. Shortly after these pronouncements, Bryan was relieved of a modeling arrangement with Marks & Spencer. Despite that fiasco, and his advancing age, he still looks great in suits, and is as frequently celebrated for his sartorial splendor as he is for his music.

I’ll have to confess my bias here. I would listen to Bryan Ferry singing pages from the telephone book. Not that there are any telephone books left in the world to sing from. From his early days in Roxy Music, to his great single covers album These Foolish Things to the outstanding Flesh and Blood in 1980 and the unforgettable Avalon in 1982, I have cherished this man’s music, his style, and his dedication to great songs. He is a modest man for all of his accomplishments. “I lead quite a sheltered life”, he says. For all that shelter, his songwriting is distinctive, sensual, and elegant: combined with the innovative genius of Brian Eno who has heavily influenced Ferry, he has made music for forty years now that has stood the test of time.

Enough with praising his past. In his words “you’re only as good as the last record”, and since Olympia in 2010 is his most recent record, Bryan Ferry is damned good. The new album opens with ‘You Can Dance’, a driving, thrumming track with three bass players in the mix, the notable Flea among them. Burning guitars sear across this tune in a very now production – nothing old or lazy about this guy.

Standout tracks are actually too many to list, but give a serious audition to his beautiful cover of Tim Buckley’s ‘Song To The Siren’ as well ‘No Face, No Name, No Number’ and the truly seductive ‘BF Bass’, which maybe should have been titled MF Bass. ‘Reason or Rhyme’, and the gorgeous, contemplative closing track ‘Tender is The Night’ are tunes you will want to program for your next romantic dinner. Don’t know if he is consciously writing makeout music, but let’s be frank – Bryan Ferry excels at it.

This year has seen the recharging of a number of aging rockers, crooners, and Boomers who refuse to go away. I’m thinking of Clapton, of Phil Collins, of Mavis Staples, of Santana, and the noted duo of Elton John and Leon Russell. Not that you should forget about their records (excepting those of Phil Collins and Santana, who have released laughable rubbish), but don’t overlook Olympia by Brian Ferry. This one approaches Avalon in its surprising and sophisticated intensity, but with its 21st century sonics delivers even more mystery. Makes me want to order up a new suit and a Grey Goose martini.