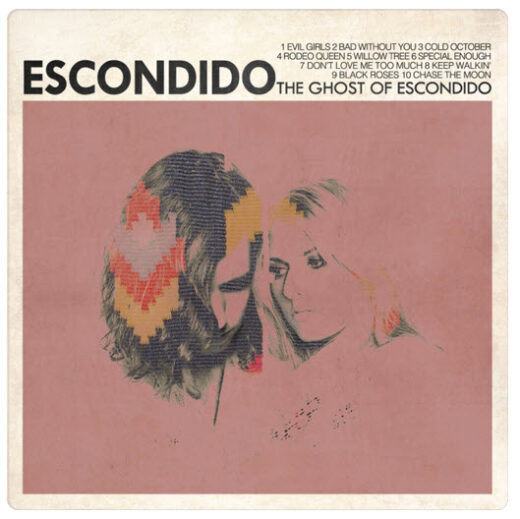 Ten songs, 32 minutes of sonic bliss that are destined to make this year of 2013 a powerful, low-key musical statement: such is The Ghost of Escondido, a self-described Americana album of ‘desert sex’, drenched in a pastel guitar and haunting trumpet landscape infused with the soul of Ennio Morricone and bringing to mind an update of the seminal Gram Parsons/Emmylou Harris collaborations that still linger over any alt-rock/country duo singing about heartbreak and desire.

Escondido consists of Nashville-based artists Jessica Maros and Tyler James. Something tells me we’re going to remember those names for some time to come, and summon them up in the same breath as Gram/Emmylou and another 70s twosome that came upon the scene bursting with similar promise – specifically, Lindsey Buckingham and Stevie Nicks. Well, it’s true we’re given to superlatives from time to time at Vivascene, but that stems from our editorial direction – to write only about what we love. And this is a record we truly love, from the opening notes of “Evil Girls” right through to the sweet, sultry lovelorn closer “Chase The Moon”.

What makes this recording so distinctive is that it was recorded live over one day on October 17, 2011 at The Casino Studio in Nashville, with a cracking band behind the duo that engendered a fully-formed fusion of country, rock, and spaghetti western. Tyler James himself supplied the very cool and very terrific trumpet accompaniment on several of the tracks. Musicians Evan Hutchings (drums) and Adam Keafer (bass) complement Scotty Murray’s elegant and brooding guitar work, while James fills in on additional guitar and keyboards. Dominating the mix are Jessica’s intoxicating vocals, as enticing as Stevie Nicks’s best work, and occasionally as fragile and forlorn as Emmylou herself. When Tyler does harmonize with Jessica, the result is both purposeful and effective. All of the material is original, most of it co-written by the two of them, though Leanne Ford shares extensive writing credit.

Key tracks: the opener “Evil Girls” with the finest mix of trumpet and guitar atmospherics in the past thirty years; the down-tempo “Willow Tree”, a ballad of confessional longing that just may tear your heart out, and the ironically playful “Don’t Love Me Too Much” a dynamite live performance piece that simply urges the band to rock out. And “Cold October” is very strong as well, though highly reminiscent of The Cowboy Junkies. The killer track, though, is “Keep Walkin'”, a hook-laden, sultry gem of a goodbye song that deserves immediate and widespread airplay.

Jessica and Tyler met while James was recording a mutual friend at his home studio. Says Tyler:

Jess was quietly strumming this song “Rodeo Queen” on the couch while everyone else was making drinks in the kitchen. I pushed ‘record’ and added a little groove before folks got back in the room. Later that night we listened to it and both said ‘You wanna make a record?’ We wanted to capture that initial instinct. The talent in this town allows you to set up in one room and let ’em do their thing.”

Over the next two months we’d put on Ennio Morricone every morning. It’s an easy process when you both love the same stuff… The record was an outlet for me. Each song brings me back where I was, what I drank when I was writing them. It was a dark time and this album got me through it.”

Maros, a Vancouver, British Columbia native, initially moved to Nashville with a record deal but found considerable success as a clothing and jewelry designer. Her creations have been worn by the likes of Prince and Lady Antebellum, and her dresses have been seen at the Oscars and Country Music Awards shows.

As for Tyler, he’s a small-town Iowa native who has spent the past decade on the road, both as a solo artist and as a member of indie band Edward Sharpe & The Magnetic Zeros. Special mention must also be made of his design talents: he is responsible for the packaging of the CD, as gorgeous a printed piece as we have seen in some time.

Regarding their decision to collaborate, Maros says, “We both wanted a change of pace. I wanted to focus on music again and Tyler wanted to spend more time in town making records.”