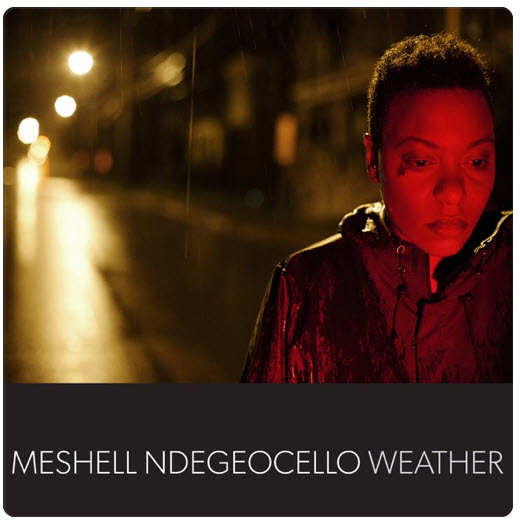 Meshell Ndegeocello moves from genre to genre easily, one album appearing as a pop diva, the next a soul songstress, and yet again a jazz artist, but with her latest album Weather, it appears that the wizardry of producer Joe Henry has perfected her special brand of neo-soul. It’s dark, dense and lovely, very much in sync with her Roberta Flack/ Nina Simone/ Sade influences, yet deeply original. It may be the elegant instrumentation, the heartfelt lyrics, or the groove that permeates even the down-tempo tracks, but Meshell’s talents, by turns restrained and turbulent, have delivered a Weather that is simultaneously gorgeous and unsettling.

We are strongly reminded of the highly sophisticated song constructions and soulful phrasing found in Joan Armatrading’s albums of the late 1970s, particularly those produced by Glyn Johns. Not to say that Joe Henry is channeling other producers – he’s very much his own man, but Meshell and Joan have this in common: they make deeply personal and deeply affecting albums that can’t be categorized. And Henry’s role in this is not to be underestimated; he’s one of the most gifted producers in music today.

Meshell (whose self-chosen surname means “as free as a bird” in Swahili) grew up in Washington, D.C. in what she has called “a war zone”, joined a Muslim sect and changed her name. She began to write and attended the Duke Ellington School of the Arts, and then Howard University. Her father was a musician in a U.S. Army band and bought her a bass guitar (check out the track “Dirty World” on her new record for a taste of her funked-out virtuosity on the bass). Madonna heard a demo tape and signed her immediately to her then-new Maverick Records label). Here it is nine solo albums later and she has left Maverick and joined Naïve Records, an independent French label based in Paris, a label that is home to such disparate performers as Pink Martini and Carla Bruni-Sarkozy.

Now, on to Weather itself, which has been described as “a strikingly organic record, Meshell experimenting with the sparse, orchestral melodies paired with thoughtful lyrics, all performed by a band of fearsome musicians.” Guests are Chris Connelly and Benji Hughes, and the tunes are mostly original, though Meshell does a splendid cover of Leonard Cohen’s classic “Chelsea Hotel #2”. The drumming throughout sets an almost mournful tone to most of the songs, and is as densely and thickly recorded as the distinctive sound of Howard Grimes on the greatest recordings of Al Green. Standout tracks include the opener, “Weather”, as well as “Feeling for the Wall”, and the closer “Don’t Take My Kindness for Weakness”, a gently firm remonstration to her lover that she won’t be mistreated. The tune showcases her restrained vocal over a radiant piano/guitar instrumentation.

This is a wonderful record, a timeless work of art that caters not one whit to the marketplace and deserves a place among the great soul recordings of Meshell’s masters.