Ben Harper and Charlie Musselwhite ‘Get Up!’ Album Review 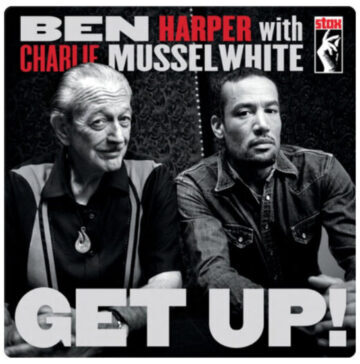 The 2013 Ben Harper album, Get Up!, which is a collaboration with famed blues harpist Charlie Musselwhite, is not just a killer blues album; it’s a killer album period – one of those records that restores any faith in the music industry you might have lost in the past decade or two. One of those records that makes you call up, email, shout out to all of your friends that, man, this is one you just gotta hear! It’s the album Ben Harper was born to make, and as for the 69 year old Musselwhite, well he’s made several classics since his 1967 Stand Back! debut, but none in a supporting role stronger than this one.

Charlie has been quoted as saying “I only know one tune, and I play it faster or slower, or I change the key, but it’s just the one tune I’ve ever played in my life. It’s all I know.” That may be his own modest assessment of his superlative abilities, but it’s hardly that of his contemporaries or anyone who has been privileged to work with him. Witness Tom Waits who called him in on Mule Variations. Witness that he was the role model for one of the characters in The Blues Brothers. And that his 1979 The Harmonica According To Charlie Musselwhite has taught thousands of aspiring harpists to play the blues. Further, as a band leader he brought along the guitar geniuses Harvey Mandel and Junior Watson. Norton Buffalo claimed that Charlie was and is the greatest country blues harpist alive. So, he’s got what it takes to inspire one of the best of our contemporary writers, singers and self-styled folklorists: Ben Harper.

Harper produced the album, though co-producer credit is given to several of the band members. Notably it’s dedicated both to Solomon Burke and John Lee Hooker, two of the most seminal artists ever to take up the blues. The dedication is an expression of the authenticity that Harper sought in making this record. You simply can’t bring up those names and release anything less than a masterpiece. And Get Up! is just that, a modern masterpiece of ensemble playing, deep blues feeling, melded with a contemporary essence that exudes the restraint necessary to bring forth catharsis to the listener. For the blues is indeed about the achievement of grace through the release of tension.

Key tracks: the stinger opener “Don’t Look Twice”, a blistering sleeper, and so surprising that I had to halt the play and hear it one more time immediately. Then there’s the title track “Get Up!” which reveals once and for all that Harper is one of the best guitarists around, slide and otherwise. Special mention must be made of the superb bass work throughout the record by Jessie Ingalls, as well as the supporting strong guitar of Jason Mozersky and hard-hitting stickwork on the drums by Jordan Richardson. And as for Harper, his voice has matured; it’s deeper, darker and infused with a melancholy that suits these new songs well. And he can still punch it out too, a quality particularly evident on the explosive “I Don’t Believe A Word You Say”. Musselwhite is in fine form on this outing as well, particularly on “I’m In I’m Out and I’m Gone”. Thematically it’s an update of Bob Dylan’s “You Gotta Serve Somebody”, though with a bottom end and an expressive harp that Dylan can only imagine – no band he’s ever assembled has ever produced on an end-of-life blues rocker such as Harper and Musselwhite deliver here.

And by all means buy the Deluxe version of this release, as it includes the Machine Shop acoustic sessions of several of these tunes, as well as a splendid video documentary on the making of the album. Charlie makes it clear that he considers that he and Ben “are locked in, kindred spirits, musically and personally”. Hot damn if that hasn’t resulted in what must surely be a contender for one of the top albums of 2013.

We’ll leave the last word to Charlie, who said about this album “This is more than just music”.