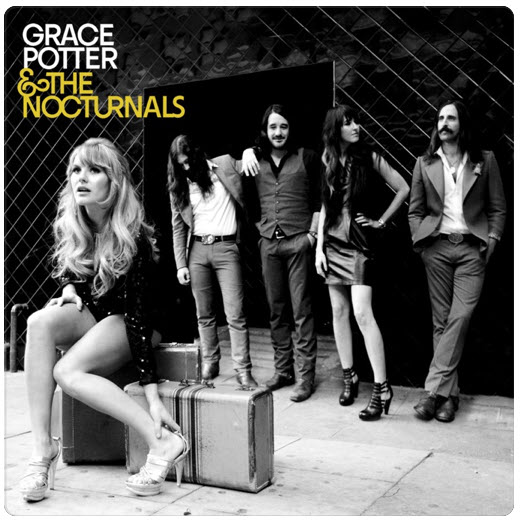 Grace Potter looks to be the new young Queen of Rock and Roll. Consider this: there are good weekends and then there’s the one Grace Potter had to kick off December. After stealing the show at the ‘VH1 Divas Salute the Troops’ special, Potter and the Nocturnals rode that wave of publicity to the top of the iTunes album charts, knocking off the Beatles. She also has a key song in the new Disney animated film, ‘Tangled,‘ which toppled ‘Harry Potter’ at the box office.

“Oh my god, that’s f—ed up,” Potter exclaimed. “I’m kind of freaked about it right now. It’s a real event in our lives that we’ve been working towards, so it feels really well deserved on behalf of my bandmates, but also just amazing for myself too.”

During the years they’ve been building up to this success, the Nocturnals have developed what Potter called a “signature sound” — a blues-rock hybrid that, combined with her ferociousness on stage, has them dubbed by many as a live act not to be missed.

With that success, Potter — who’s in the midst of writing their next record — isn’t afraid of changing things up. “We are at the point in our career where we want to do something a little different,” she says. “That’s part of why I’m glad it took so long for us to get here; we’re still finding our sound. Now that we’ve got something going for ourselves, I’m ready to just crash it to the ground and start all over.”

The next record could go in a lot of amazing directions based on Potter’s influences and collaborations. “We’re getting into a lot more electronic stuff like LCD Soundsystem. We saw them at Austin City Limits and I was completely obsessed,” she says. “Not that LCD Soundsystem has anything to do with us, but I kind of love that. Even if you can’t hear it when you’re making a record, influences are found everywhere. It might be a cool Radiohead track with a sound on it that you want to use.”

She also found a friend and inspiration in country star Kenny Chesney. “I thought I knew everything there was to know about country music. I kind of wrote it off and filed it away. But doing that record with him, and that song in particular, ‘You and Tequila,’ really opened my mind to how amazing that whole world of songwriting is,” she says. “I went down to Nashville and the process of songwriting in Nashville, I loved it. It’s really organic. I made a lifelong friend in Kenny. He was texting me all night in ‘VH1 Divas’ telling me how proud he was of me.”